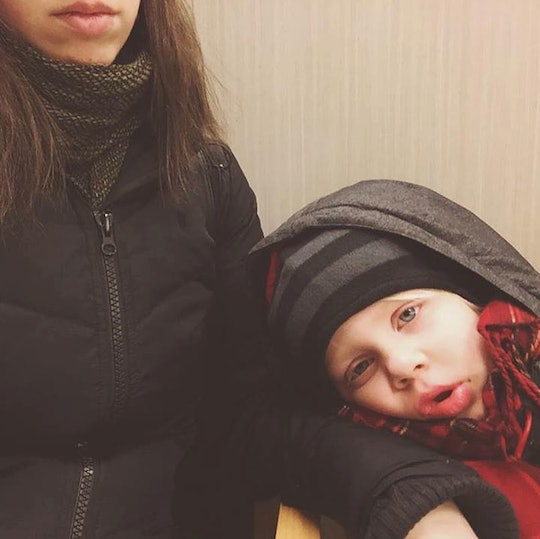 10 Thoughts Every Mom Has When Her Kid Is Sick

There are plenty of less-than-pleasant moments that accompany motherhood, but I'd argue that having a sick kid is the actual worst. As parents, we do everything we can to try and keep our kids from becoming ill or feeling pain. Most of us choose to vaccinate our kids, others will try herbs and supplements or other forms of alternative medicine. But, sooner or later, no matter how hard you try, your kid will get sick, and it will suck. It'll be awful and it will be exhausting and it will leave you thinking some very real, sometimes hilarious, always understandable, things.

When your kid gets sick — say, with a cold; something not life-threatening but definitely unpleasant — it's hard to stay positive. For one, it's devastating to watch your usually happy, energetic child turn into what can only be described as a zombie baby. They're tired and somewhat lethargic and would rather sleep than play or get into trouble. While the snuggles may be nice, you know they're not feeling well and you would gladly trade their calm demeanor for their usual mischievous behavior if it meant they felt better. Secondly, it's difficult to not assume the worst and fear that your kid is suffering from a more serious illness. The mind is cruel sometimes, you guys.

Then, of course, you can't help but think of how exhausted and stressed out you are. While your kid and their health and comfort are a top priority, it's worth noting that when your kid is sick, you're also miserable: They're not sleeping so you're not sleeping; They want to be held so it's almost impossible to get anything else done. You don't want to complain about how hard it is for you (because you're not sick, your kid is), but it is difficult and there's snot everywhere and oh my god you just need to vent before you lose your mind.

Which is why, whatever it is you're thinking while your kid is sick, it's OK and it's normal. You're allowed to feel overwhelmed and stretched thin, because you are. You're also allowed to think these 10 things, because motherhood has plenty of challenges, but taking care of a sick kid is the most challenging.