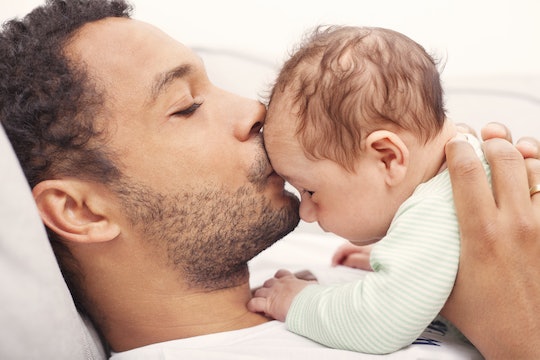 I'll never forget the moment I held my son for the first time. I was exhausted and terrified and overwhelmed and so very much in love. A part of me couldn't believe he was actually in my arms, while the other part of me felt like I had known him my entire life. I'll never forget the moment I watched my partner hold his son for the first time, either, and can only imagine what that felt like for him. So, instead of imagining, I asked dads to describe what it's like to hold their baby for the first time, so that I could gain some perspective. After all, I might have been in the room and I might have been the one to give birth, but I have no clue what it's like to hold your baby after you've just watched your partner bring them into the world.

I was the first person to hold my son and, sorry not sorry, rightfully so. After all, I was the one in labor for over 24 hours, pushing for over three hours and ending a long and grueling pregnancy is the most dramatic, most physically demanding way I could have possibly imagined. However, after holding my son (and after his breathing stabilized and he was checked out by NICU doctors) my partner was able to hold him and, well, the look in his eyes told me magic was happening. I knew what I felt, but I also knew that — for my partner — his feelings weren't going to be the same as mine. We were both parents now and we were both going to raise this baby together, but we were going to have different perspectives and, as a result, different experiences. That's arguably the best and worst part about raising a baby with someone; you're in it together, but the two of you aren't exactly the same things will always be slightly different for the both of you.

I asked my partner how it felt to hold our son for the first time, and the one word he said over and over again was relief. He was so happy our son was with us, safe and sound, and that I was healthy and had made it through labor and delivery. Turns out, he's not alone in that feeling, either. Here are just a few feelings new dads had when they held their baby for the first time: