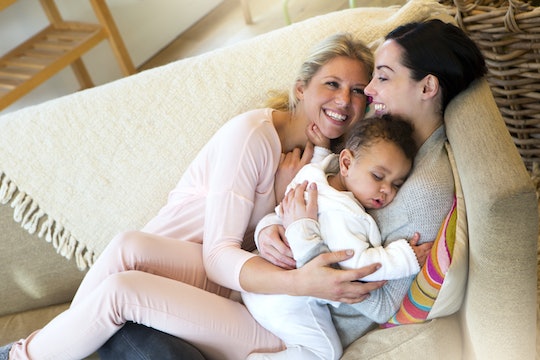 11 Things No One Will Tell You About Co-Parenting, But I Will

Before I became a mother, I was acutely aware that parenthood would be tough. I knew that I would be exhausted and that I would have numerous responsibilities and that I would have to make some very serious decisions. I didn't realize, however, how difficult co-parenting would be. There are things no one will tell you about co-parenting; Things that would create more realistic expectations for new mothers, like myself, who have no freakin' idea what they're in for.

When I found out I was pregnant and decided I wanted to be a mother, I was not married. I had just started dating my partner, and after carefully considering what parenthood would entail and evaluating our new relationship, we both decided that we could be parents, as individuals and together. I consider us pretty like-minded and we agree on so many things, but that doesn't mean co-parenting has been easy. Whether it's fighting to combat the idea that we're somehow lesser parents because we aren't married, or it's agreeing to disagree or find some sort of compromise when we have different ideas about parenting in general; co-parenting is difficult. Like motherhood, it isn't all rainbows and butterflies the way so many people, and society in general, would lead you to believe.

Thankfully, as the idea of "family" has evolved and more and more people are realizing that a family doesn't have to look any one way to be valued and respected, co-parenting relationships are being openly discussed in an honest and real way. I'm more than happy to add to that discussion, because even though I've only been a mother for two years I have learned os much about what it means to be a co-parent. Here are just a few of those lessons:

More Like This
I’m A Newly Single Mom. How Do I Get Over My Body Insecurity?
Sex And Mom Guilt: When I Date Someone New, Am I Cheating On My Kids?
24 Amazing Harry Potter Costumes For Fans Of All Ages
12 Helpful Tips For Hiking With Kids