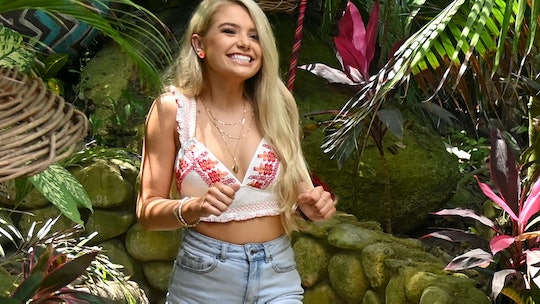 Demi Burnett is easily the best part of Bachelor in Paradise Season 6, and nothing you say can convince me otherwise. After opening up about her sexual fluidity on the ABC reality series, Demi reunited with her girlfriend, Kristian Haggerty, and the two have been inseparable ever since. Meanwhile, Demi has continuously — and hilariously — been the voice of reason throughout the entire season, and the Sept. 2 episode was no exception. In the episode, Haley Ferguson confronted John Paul Jones about his behavior. And while most fans sided with Haley, the Demi reaction GIFs from Bachelor in Paradise proved the reality star's facial expressions were the real winners of the situation.

Not going to lie, the drama between JPJ, Haley, Derek Peth, and Tayshia Adams is exhausting. The love square ultimately led to Derek's departure in the Sept. 2 episode. However, Haley's conversation with JPJ was arguable more infuriating than anything that was shown between Derek and JPJ. During their talk, JPJ admitted he dated Haley because Tayshia told him to "test the waters." In response, Haley went off — and rightly so.

"How is that fair to me? Test the waters? Are you testing the waters with me for fun?" she asked the financial analyst. "You told me we had an instant connection. Why would you give me the rose if you didn't really feel that way? I would rather just go home than take your rose just for fun. It's not about getting a rose for me. It's about actually finding something serious."

While all of the drama continued pouring out between JPJ and Haley, Demi and Kristian are seen together behind the arguing pair, and Demi's facial expressions perfectly captured what most of Bachelor Nation was feeling during the scene.

"JPJ is just digging himself deeper and deeper into this massive hole," Demi said in a confessional. "He seems a bit hypocritical because he's talking about Derek using women when that's what he's been doing with Haley. And so, I'm just enjoying listening to Haley give him a taste of his own medicine, because he needs it."

Seriously, how could someone not make this face when JPJ told Haley she was a "big girl" who could have explored her options when she arrived in Mexico. Big yikes.

Nevertheless, Demi's reaction to JPJ and Haley is the best thing to come out of the situation, as it dawned new memes that will probably remain with Bachelor Nation until the very end.

"Seeing your bank account after living your best life," the official Bachelor in Paradise account tweeted, along with a GIF of Demi's shocked expression.

However you look at it, the sheer abundance of fans cheering on Demi's face simply shows everyone what they already know — Demi is the queen of Paradise, and nothing is going to change. So here's hoping for more meme-able moments from Demi as the final episodes of BiP Season 6 come to an end.