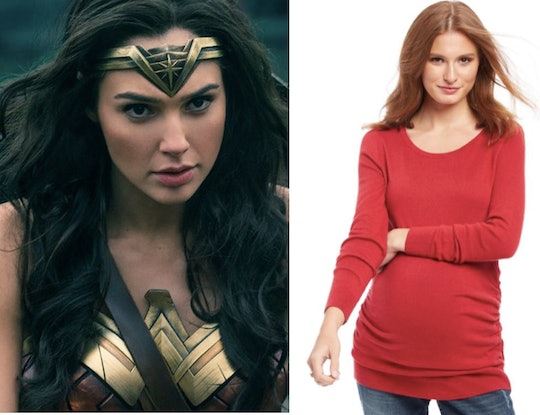 Whether you decided to be Wonder Woman for Halloween before you found out that you're expecting or after, being pregnant on Halloween doesn't have to derail your badass plans. While you might not able to don the full-on, traditional Wonder Woman get-up if you're far along in your pregnancy, there are plenty of options when it comes to Wonder Woman costumes for pregnant women that won't require you to sit this Halloween out or bare it all (unless you want to!). From easy DIY costumes, to barely even a costume costumes, to accessories that just scream Wonder Woman, you can make your costume as involved — or straightforward and simple — as you'd like.

You'll need some basics if you're going to dress up as Wonder Woman while you're pregnant. A red shirt or blouse, royal blue leggings, pants, skirt, or dress, and (at least) a gold belt will get you nearly all the way there. Golden shoes are also a must. Beyond that, you'll need to determine the direction in which you want to take your costume. Don't overthink it — Halloween is supposed to be fun. Besides, you're growing a human, you're already basically a real-life Wonder Woman.