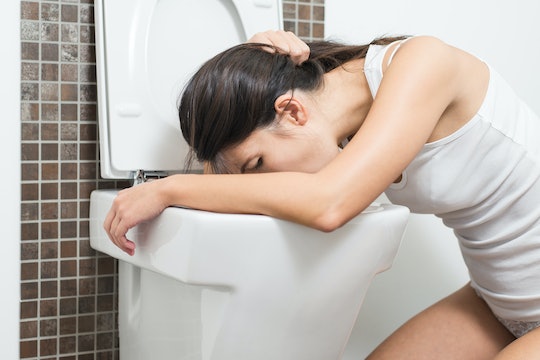 7 Early Signs My Pregnancy Was Going To Be Rough

I think it's safe to say a pregnancy is never "easy." There's nothing effortless about growing humans. Still, I wanted to believe I would have a pain-free, comfortable, straightforward pregnancy. I thought I'd glow, have beautiful, shiny long hair, and float my way through 40 weeks (more or less) of gestation. Ha. Yeah, that didn't happen. And, unfortunately, I ignored all those early signs my pregnancy was going to be rough. If only I had been paying better attention to my body and the numerous red flags it was throwing in my direction. Perhaps, if I would have noticed I had a long, demanding road ahead, I would have been better prepared for the trials and tribulations of gestation.

My two full-term pregnancies started relatively the same way. There was sickness, discomfort, and a strange out-of-body feeling that let me know it was time to pee on a stick. But even as terrible as I felt in the beginning of each pregnancy, I thought those symptoms would eventually pass. I'd read the first trimester was the trickiest and, arguably, the most difficult. I knew my body was adjusting to this influx of hormones, but soon (read: in the second trimester) I would hit my stride and feel better. Right?

Wrong. I was so wrong. Not only did those first trimester issues last the entire nine months of both of my pregnancies, but they'd serve as a precursor of the horror to come. And while I'm not trying to deter women from getting pregnant or scare women who are trying to conceive, I will say that it pays to be as prepared as humanly possible. So with that in mind, here are some early signs I was about to endure a difficult as hell pregnancy:

More Like This
New Report Shows 80% Of Pregnancy-Related Deaths Are Preventable
Are Boy Babies Usually Late? Signs Your Baby May Be Born Late
Are You Leaking Amniotic Fluid Or Is It Normal Discharge? Experts Explain
Zaya Wade Is Rocking New Long Hair & As Gabrielle Union Put It, She's A "Vision"