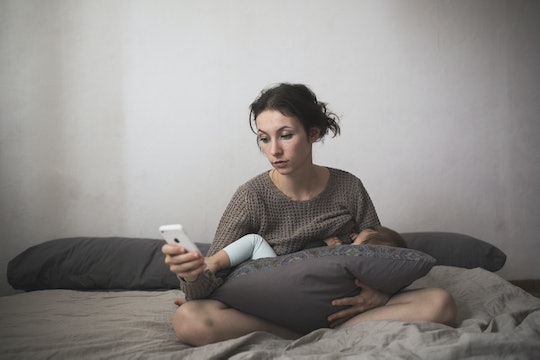 7 Fights Every Couple Has When A Mom Is Breastfeeding

My breastfeeding days were agonizing. Not only was I stressed out, but so was my partner. Becoming parents changed our lives, after all, so of course we were on edge. But sometimes, and especially when I was nursing, our anxiety would manifest into ridiculous arguments. Like the one about where my partner should have sat so I didn't have to breastfeed in some uncomfortable position. Turns out, though, there are fights every couple has when a mom is breastfeeding, so maybe it wasn't really our fault. Maybe, just maybe, ridiculous arguments are part of the growing pains associated with new parenthood. Yeah, I'm going to go with that. Don't @ me.

My partner and I were, admittedly, short-tempered after the birth of our first baby. We had no idea what we were doing, so our growing frustrations, coupled with extreme fatigue and sleep-deprivation, made what should have been an exciting time, well, not. And because breastfeeding was so difficult for me, simple discussions turned into out-and-out arguments. Asking where the pacifier was last seen became a battle, and inquiring as to who used up the last of the nipple cream as hand moisturizer turned into a situation that can only be described as a full-scale criminal investigation the likes of which the FBI itself has never seen.

Yes, these arguments could've been avoided, I'm sure, but I was stuck in the breastfeeding haze that left me with little time, or patience, to deal with anything else. So if you're nursing, and your partner is getting on your last nerve, know that you're not alone. Every couple will argue when one partner is breastfeeding, and those arguments will probably look a little something like this: