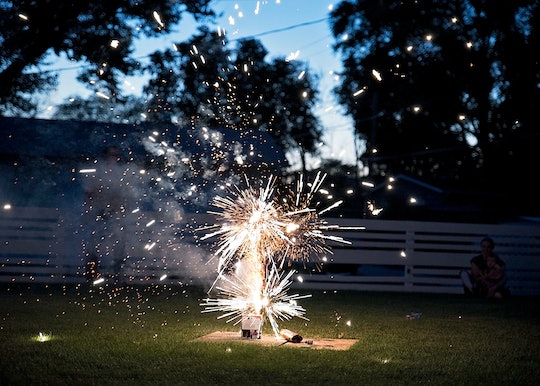 7 Fireworks Safety Tips For Kids Every Parent Should Know

With many local fireworks displays canceled this year, lots of families will likely be staging their own backyard pyrotechnic shows. Unfortunately, these amateur attempts can end in disaster. Before you even think about lighting up the night, there are certain fireworks safety tips for kids that every parent should know — although as far as the experts are concerned, the most important tip is to avoid using fireworks at all if you can.

“There really is no safe way to use fireworks, and there’s no safe way to do it around children,” Ben Hoffman, M.D., a professor of pediatrics at the Oregon Health and Science University School of Medicine and the chair of the American Academy of Pediatrics’ Council on Injury, Violence and Poison Prevention, told the New York Times. “Every time you do it, you’re just rolling the dice.” Admiring fireworks from a distance is much different than shooting them off from your own backyard.

In 2017, over 12,000 people were badly injured and eight people died in after fireworks-related incidents, according to the Consumer Products Safety Commission (CPSC); 50% of those injuries happened to children and young adults under the age of 20.

“There are a lot of burns and severe injuries to the hands and face including, like, fingers being blown off,” Dr. Hoffman said.

With that image in mind, you might just decide to stream some virtual fireworks instead (turn the lights off and pass out popsicles; it'll be just like the real thing). But if you still can't resist the urge to put on your own fireworks show, these safety tips are super important to follow.

More Like This
Can You Light Fireworks In Your Backyard?
Here's What The Law Says About Lighting (Or Even Carrying) Fireworks In The Park
15 Fun & Historical 4th Of July Facts To Share With Your Kids
Here's How To Explain Fourth Of July To Your Kid