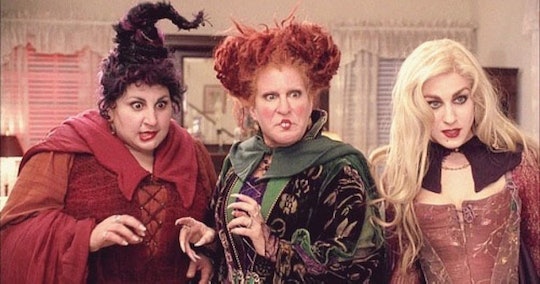 So your little one wants to be a witch. But not just any old, pointy black hat, green nose witch. She wants to be one of the silly, camp-tastic, swirly-wigged witches from 1993's Hocus Pocus. Well, you're in luck, because I've rounded up some of the most adorable and fabulous Hocus Pocus costumes for your wee witch (or yourself) to run amok in this Halloween.

The film Hocus Pocus of course stars Sarah Jessica Parker (the Carrie witch), Kathy Najimy (totally the Miranda witch), Bette Midler (Samantha witch, obvs), and Doug Jones (Charlotte witch), and is a goofball tale of the Sanderson sisters: three witches who were hanged to death during the Salem witch trials, but who manage to come back 300 years later to wreak havoc on Halloween.

It is, one could say, a rather lighthearted retelling of that dark period in history, where women really were burned alive or drowned for such evils as drinking alcohol and staying up too late playing shuffleboard. But anyhoo! Bette Midler wears funny teeth and someone rides a vacuum cleaner like a broom, so let's just enjoy ourselves and move on, shall we?

If you should find these witchy ideas too expensive or labor intensive, I suppose you could always carry a small black goat and hang out of a tree completely naked, and just tell everyone you're the witch from The Witch. That would definitely be cheaper. Though would also likely involve the police... And, of course, you'd have to track down a goat.