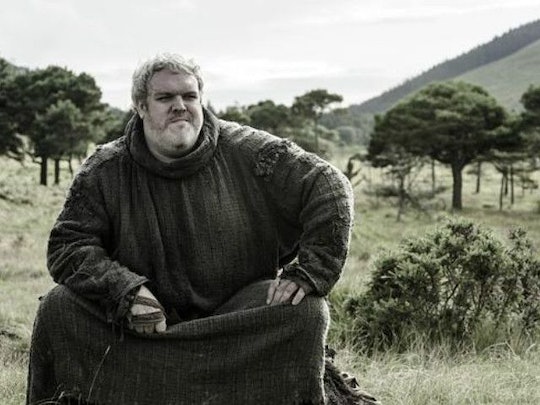 Since we finally got a small glimpse into Hodor's past in Episode 2 of Season 6 of Game of Thrones, and found out that he has another name (Wylis), fans have been kind of obsessed with the once-talking Hodor, potentially wondering who is Hodor on Game of Thrones? And naturally, the fan theories about Hodor have been generating through the internet, which if you hadn't already figured out, is a whole subculture of Game of Thrones super fans.

The theories about Hodor/Wylis range from total wishful thinking, to kind of logical, and then of course to the totally out there. But with Game of Thrones, there usually isn't anything off the table. Remember, this is the show in which we've seen dragons, men made of stone, and a khaleesi who looks fierce even after waling in the desert for several weeks. So yeah, sorcery.

But when it's all said and done, we all know that there is going to be a lot more to Hodor's backstory than being a stable boy to the Starks who can say more than his non-name. It wasn't just a treat to be able to see his younger self in Bran's flashback vision last week. And chances are, we'll be seeing a lot more of Hodor/Wylis as Bran delves deeper into his family's past. We're seeing it all for a reason, so logic would tell us that we're also seeing Hodor/Wylis for a reason, right?

Here are theories as to Hodor's past that I'll definitely be thinking about until we get a definite answer.

He Was In A Warging Accident

One popular Hodor theory from Reddit is that he was once a warger like his BFF Bran. His animal of choice, according to this idea, was the horse we saw him with as a kid, the one Lyanna had just finished riding. This would make sense since Lyanna also seemed to have a comfortable friendship with him, being the only person we've seen so far at all for him to actually talk to. So how did warging into a horse turn him into a simpleton human?

As the theory goes, he was injured while he warged into a horse, which permanently damaged him as a human. Whatever blow killed the horse he'd warged into left him alive but basically with brain damage.

He Warged Too Much

This theory plays on the whole warging idea, but gets a little trickier. Since Hodor was a stable boy and a horse warger, maybe he liked to spend a lot of time as a horse instead of a human. As one, he could get the sort of attention and love that Wylis probably didn't get much of as a human boy, as we saw from Nan's not so affectionate attitude toward him.

In this theory, he was killed as a horse, yes, but his mind somehow mixed with the temperament of a horse, and as a human he is now almost a horse inside of a human's body. Which might make sense, seeing as how he is literally the "horse" of Bran since Bran can't walk, and he is now more faithful of servant than ever.

He Fought With Robert Baratheon

It's no secret that Robert Baratheon was a temperamental brute. We see this in him as the adult king, bedding enough prostitutes to have like 30 bastards floating around, and treating Cersei like a second-rate wife. So it stands to reason that he was probably even more of an impulsive jerk as a teenager, friends with Ned and planning to be married to Lyanna.

So when he sees her relationship with Hodor/Wylis, he isn't threatened by him as a romantic competitor, but still jealous all the same. So what does Robert do? Gets into an actual fight with him, and damages him permanently. As we've already been pointedly told, Hodor would never be a trained fighter himself.

He Was Injured At The Tower Of Joy

In the previews for Episode 3, we see what are widely believed to be shots at the Tower of Joy (finally), and since we'd seen Hodor at Winterfell in Episode 2, I'm hopeful we'll get another view into his childhood. The theory that he was injured at the Tower of Joy isn't totally backed up by a ton of evidence, but it plays on the fact that he had a special connection with Lyanna.

Since Lyanna was the one being held at the Tower of Joy and had been a friend to Hodor, he may have convinced Ned to bring him as someone to tend to the horses they were to take, or some other such reason. Regardless, the theory is that the young Hodor tried and failed to protect Lyanna here and as a result, sustained a head injury.

He Helped Lyanna Run Away

This is more of a cross theory than anything else. Since there is a belief that Lyanna actually ran way from Winterfell to be with Raegar Targaryen, but since there is no evidence to show whether he actually kidnapped her or she went with him willingly, it is somewhat possible that Lyanna ran away and Hodor helped her. There has to be a reason they showed us the two of them together, affectionate like family, right?

In this theory, Hodor held the door for her to leave Winterfell and sustained an accidental injury in the process. And from then on, he could only say "Hodor", a version of "hold the door." At the very least, his name stemming from this idea isn't too far off, according to a fan's interaction with George R. R. Martin years ago. When suggesting that Hodor's name came from the idea of "hold the door", Martin reportedly laughed and said, "You don’t know how close to the truth you are!"

He Descended From Giants

Hodor is a big guy, sure, but not necessarily on Wun Wun's level. Even still, there is a theory to suggest that Hodor has giant blood in him. This comes front the fact that when Osha, a wildling and therefore a reputable source on giants, first sees him, she speculates as much. Although we've only seen actual giants, there's no reason to believe that there isn't such a thing as half-blood giants, or even quarter-blooded, right?

All we know about Hodor right now is that he is somehow connected to Old Nan and was a stable boy at Winterfell. And yes, that compared to much of the other folks in Westeros right now, he is something of a giant.

He's The Great Other

There's another theory that confidently suggest that Hodor is the Great Other. For those of you who don't know, the story of the Great Other is a great God-like entity that is mentioned by Melisandre a few times, but whose name no one knows. The theory is that Hodor is inhabited by the Great Other and has been for years. When Hodor went down into the Stark crypts below Winterfell as a boy, he came out unable to speak anything except for "Hodor," and from then on became known as such.

The theory says that Hodor left the crypts, where his body was taken over by the Great Other, who is still in it to this day. Will this be the theory to finally explain who Hodor is? It's hard to say, since we've got enough going on with everyone else in Westeros, but like we said, we were all shown Hodor's past for a reason. It wasn't for nothing.