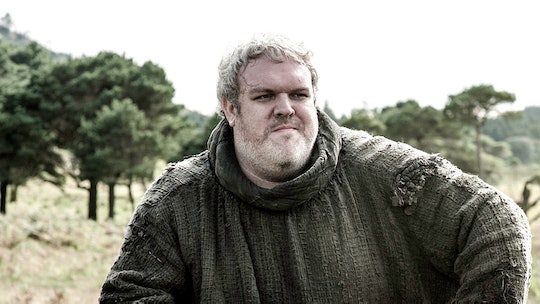 Does Hodor Know About Jon Snow On 'Game Of Thrones'? He Probably Knows More Than You Think

Until Sunday's episode of Game of Thrones, we hadn't had much to go on in the way of Hodor's past. Like, at all. The only thing we knew was that he was a native of Winterfell and ever loyal to the Starks. But now that we've seen him in Bran's vision and his interaction with Lyanna even, you might be wondering: does Hodor know about Jon Snow? Of course we're talking about R+L=J, which may be the most important Game of Thrones theory ever, and if Hodor really does have a past with Ned Stark as a kid, along with his siblings, then chances are, he knows something, right?

Not surprisingly, after getting just that short glimpse into Hodor's past, as a young kid by the name of Wylis, Game of Thrones fans all over the internet have been coming up with theories as to what this means for Hodor and his relationship with Lyanna. And if there's one thing we know about Game of Thrones fans, it's that their theories are never too far from the truth.

While one Redditor is convinced that Wylis became Hodor because of a warging accident, or by warging into a horse too much (hence, his life as a stable boy), others simply argue that no matter what Hodor's origin story is, it's going to be interesting and important. Otherwise, what was the point of showing him in Bran's flashback vision? Things don't happen on Game of Thrones just for the fun of it. Everything ends up having meaning. Except, you know, the Sand Snakes and their awful lines. We're looking at you, "bad poosi."

In the flashback we saw on Sunday's Game of Thrones, the most important thing about seeing Hodor as a kid (other than the fact that he could talk) was that he was interacting in such a familiar way with Lyanna Stark. While he seemed comfortable enough around the other Stark kids, his relationship with Lyanna seemed particularly special, as he talked to her almost shyly, her being a girl and a Lord's daughter and all.

It's hard to say what Hodor actually know, if anything major to the R+L=J theory at all, but he's clearly been in Winterfell for most of his life, if not his entire life, and by having such a connection to the Stark kids, logic tells us that he has to know something. Was he made aware of Jon Snow's true parentage but sworn to secrecy? Maybe that secret took its toll on an already simple sort of man, forcing him to not speak of anything important at all?

Or, is it something as simple as getting a head injury and never being able to speak normally again, but instead, using the one sound he can make up. However, this possibility would work best if we welcome the idea that perhaps Hodor tried to stop Raegar Targaryen's men from kidnapping Lyanna those years ago. Which isn't too far fetched, since we all seem to forget that she was held captive for like seven years, yes, but she was kidnapped to be taken to the Tower of Joy, and if she was taken from her home, then it makes sense that Hodor was there to witness what had happened.

Does Hodor know about Jon Snow and the truth behind R+L=J? That's not for sure just yet, but the fact that we were given a look into his past at all tells us that he knows more than we'd expect of him.