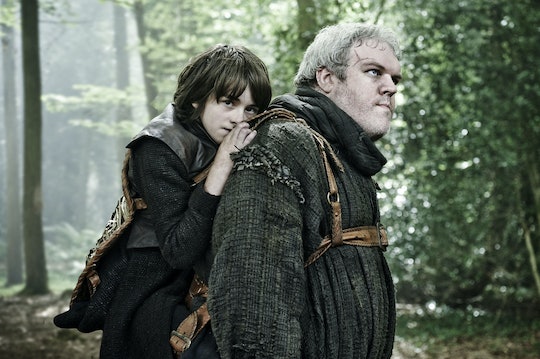 Why Can't Hodor Speak On 'Game Of Thrones'? Bran's Flashback Was Very Telling

There's a lot of characters on Game of Thrones, but one fan favorite has always been Hodor. Though he is a man of few words, only able to say his name, he has always been kind and good to the Starks, especially Bran, who Hodor carries around now that Bran is crippled. Wylis was a stable boy for the Starks, as Hodor continued to be in the present, and Old Nan (who's really just "Nan" in this flashback) pulls him away, telling him to leave the fighting to the "little lords." It's clear Wylis wanted to join in on the fun, but unfortunately he wasn't allowed to. Most importantly though, was the fact that Wylis could speak on Game of Thrones.

In Sunday's episode of Game of Thrones it was revealed Hodor wasn't always not able to speak more than his name. In fact, Hodor isn't even his original name. When Bran, with the help of the Three-Eyed Raven has a vision in the past he see his father, Ned, along with his Aunt Lyanna, and Uncle Benjen, as children. A young Lyanna suggests "Wylis" help Ned and Benjen train, and Bran discovers that "Wylis" is in fact a young Hodor.

Fast forward to the present and Bran attempts to talk to Hodor by using his original name, but Hodor still only responds with, "Hodor," much to Bran's disappointment.

But what happened between the time of Bran's vision and the present day? Why did Wylis become Hodor and stop speaking? One theory is that he knew something he wasn't supposed to know. Possibly that R+L=J theory we can't seem to stop talking about. It's clear he was friends with both Lyanna and Ned, so it could be possible that the one person Ned told about the truth of Jon Snow's birth was Hodor. However, Ned wouldn't hurt Hodor (hopefully) and to lose your speech the way that Hodor has it's more likely that he was hurt in some way that has left him scared for his life.

Wylis probably saw or heard something he wasn't supposed to see and got punished for it, similar to how Jamie pushed Bran out the window when Bran caught Jamie and Cersei hooking up. If that's the case, what does Hodor know and how long has he been unable to reveal it? One big clue is the moment when Hodor freaked out while he, Bran, Rickon, Osha, Meera, and Jojen hid in the windmill back in Season 3. Hodor seemed to be terrified of the storm, especially the thunder, and it wasn't until Bran warged into him that Hodor was finally quieted. Possibly something happened to Hodor when there was a storm or he lost someone near to him in a storm. Whatever it is, it's hard to dismiss this scene as insignificant.

It's also possible the answer is hidden somewhere in the fact that the only word Hodor can say is "Hodor." Since it's not his given name, as we all believed, what is the significance of it? Is Hodor even a name or is it a word that has some alternative meaning?

Although the latest Game of Thrones episode definitely gave us a lot of answers, it has also left us with a lot of questions. Hopefully we'll get more answers as this season continues.