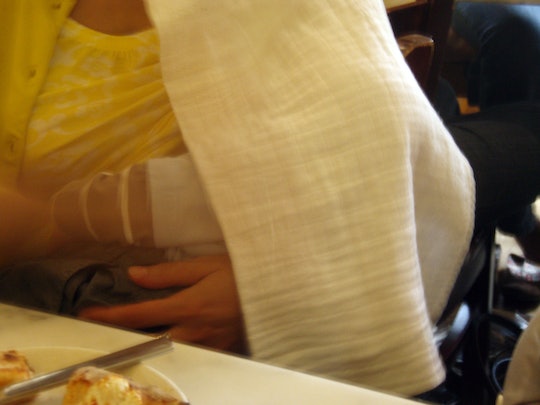 When you become a parent, there's no end to the unsolicited advice, unrelenting judgement and unending opinions you'll hear about your choices. Whether you gave birth at home sans drugs or had a scheduled c-section; sleep trained your baby or co-slept until they were 5 years old; fed your baby formula or breastfeed until they self-weaned in preschool; everyone is going to tell you what they think is right or wrong. Sadly, even feminist mothers — who typically value choice and autonomy over dogmatically adhering to one particular style of doing things — will tell you what you should or shouldn't be doing.

When it comes to feeding your kid, many will suggest not only breastfeeding, but breastfeeding without a cover. You know, to flout sexist, unfair social standards about how obscene women's bodies are because we're viewed only as sex objects so how dare we use our bodies in public for something non-sexual, meanwhile, there goes a pack of shirtless men jogging by like it's not even a thing. Because of that (which yes, all very fair and real and make for totally good reasons why some feminists do choose to breastfeed in public without a cover), a lot of people thing because you are a feminist and a breastfeeding mom, that you prefer not to cover up. And moreover, that if you do cover up, you're, like, a phony feminist. A fauxminist, if you will. But make no mistake, choosing to cover up while breastfeeding doesn't make you a bad feminist.

No one should be forced to feel ashamed of their bodies, yet our society has taught women to be sheepish and apologetic about their form (especially if it doesn't adhere to a particular social standard). While it is beautiful to breastfeed sans cover, and no one should ever be made to feel guilty or gross or anything other than wonderful while feeding their child, it's just as beautiful to breastfeed with a cover, too. Feminism isn't about forcing women to do what others think they should do to further gender equality or women's rights; it's about women securing and exercising the right to do whatever it is they want to with their bodies, and as parents.

If you feel comfortable breastfeeding without a cover, please go for it and do so without a single ounce of remorse. But if you don't, please don't think you're a bad feminist for using a cover. Because you're not, and here are seven reasons why: