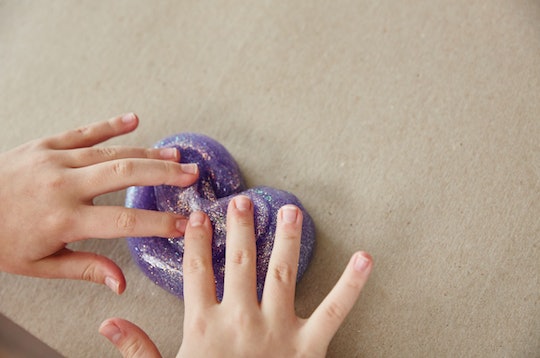 Slime is here to stay. As an easy-to-make craft that keeps kids occupied, it's no wonder slime recipes are breaking the internet. But many parents are concerned about some of the ingredients in typical slime recipes — namely, borax. If you're looking for safe slime recipes without borax, you're in luck, because there are as many different ways to make gooey, sticky, stretchy slime that are both kid friendly and parent approved.

In 2017, Romper reported on an incident where an 11-year-old girl was hospitalized for third degree burns on her hands after making a slime recipe using borax. Parents everywhere are rightfully concerned about the safety of the ingredients in their kids' slime. Although borax can be found in many common household items, including soap, it can be fatal if it is ingested. In fact, as little as 5 grams can be fatal for a child, according to the Children's Hospital of Wisconsin. So most parents, especially those with younger kids who are notorious for putting things in their mouths, aren't willing to take the risk.

Luckily, there are plenty of slime recipes that you can make with your kids that contain completely safe ingredients. Some of these recipes are even edible (hello, Nutella slime) and all of them are made with safe, touchable ingredients that won't harm your children's skin.

This article was originally published on April 7, 2017