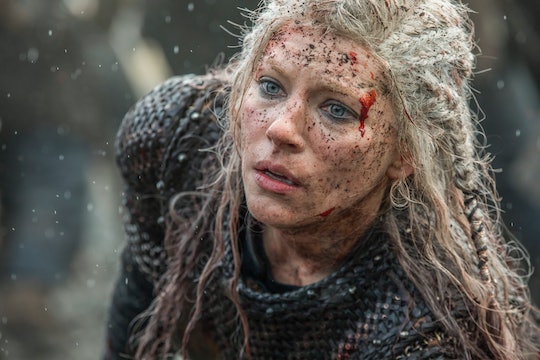 The last time viewers saw Lagertha on Vikings, she watched her latest lover, Heahmund, get slaughtered on the battlefield. Since then, she’s been M.I.A. and fans were unsure of her fate. In the preview for Wednesday’s episode, Lagertha is a shell of her former warrior self and theories about Lagertha on Vikings prove the worst may be yet to come for her.

She’s been missing for several episodes and since she wasn’t shown dead on the battlefield, it was clear that she didn't die. Now, fans know she’s alive but no one knows where Lagertha was or what has brought her back. As it is, she looks like she’s aged 10 years in the promo and she’s wearing a rough sack dress instead of her usual warrior garb. The theories about Lagertha having died during the last battle can now be thrown out the window, but there are still theories about Lagertha’s future that look equally as grim.

Personally, I’m not ready to say goodbye to the former queen of Kattegat who could still make a big comeback. Her disappearance at the end of the battle several episodes ago could have marked her for death, but since she’s about to return, obviously the Vikings writers have more plans for her in future episodes. I doubt they’d bring her back, just to kill her by the end of Season 5. She could still have some hard days ahead of her, however, and judging by their theories about Lagertha, most fans seems to agree.