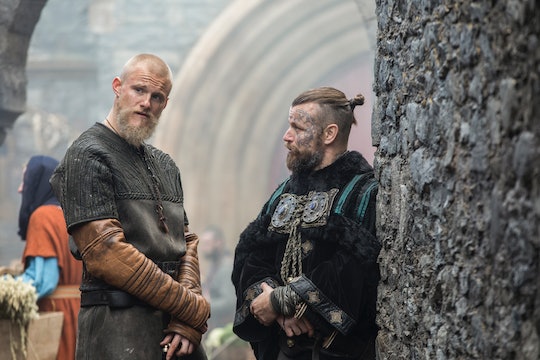 Vikings only just returned in November with the second half of Season 5, but already there are only a few episodes left until the finale. While a lot can happen in the remaining weeks, the promise of Season 6 could mean less death and more wins for the good side by the Season 5 finale. With the last episode looming ahead, fans are probably wondering when Vikings Season 6 airs and hopefully, it will arrive right on schedule. By schedule, I mean the general schedule that Vikings has kept in recent seasons.

The official premiere date hasn't yet been released, but if Season 6 arrives like the previous few seasons, it will premiere a year or so after the Season 5 finale. This means that fans might be waiting for Season 6 until the end of 2019 or early 2020. If the season is split into two parts like the previous two seasons, it could mean an earlier release date, but likely nothing sooner than November 2019. Since there hasn't been an official announcement yet about when Vikings Season 6 airs, it’s still uncertain, but chances are, fans will be waiting a year or so after Season 5 until they’re reunited with their beloved warriors.

The good news is that filming for Season 6 just wrapped. This could mean an early premiere date, especially if Season 5 ends with a cliffhanger. There’s a chance that Season 6 jumps in time to feature some of the show’s main characters in older form, but played by the same actors.

At the Vikings panel at the 2018 San Diego Comic-Con, Katheryn Winnick, who plays Lagertha, hinted at big changes with her own character in Season 6. She said that she had to endure "a good three hours a day in prosthetics to allow Lagertha to change" for the new season. In the past, Vikings hasn't been a stranger to time jumps. Right now, Lagertha is supposed to be 52 years old and let’s be honest — if that’s the case, she’s aged amazingly. If would make sense, especially if there’s a time jump, for Lagertha to have finally visibly aged.

Vikings creator Michael Hirst told Express UK in February 2018 that viewers will see the heroes and heroines of the show literally enter new territory in Season 6. He teased that they’ll be discovering a new civilization and all of the difficulties that come with it. If that’s the case, then I can see Season 5 ending with an epic battle to set things up for a new beginning of sorts in Season 6. Of course what kind of beginning remains to be seen, being that Vikings Season 6 marks the end of the series.

Deadline recently reported that although Vikings will come to an end after Season 6, History is already in talks with Hirst about creating a spin-off series to continue some of the Vikings stories. As of right now, there are no other details about the potential spin-off, but it’s definitely good news for fans who probably haven't taken the news of Vikings’ imminent end well.

Until then and until the official premiere date for Season 6 is announced, viewers still have a handful of episodes to finish out Season 5. There have already been some major deaths, including the shocking one of Jonathan Rhys Meyers' character, and big bloody battles. I expect more of the same before the season is over and, probably, in the Season 5 finale. After that, all that will be left to do is wait for Season 6 and the beginning of the end.