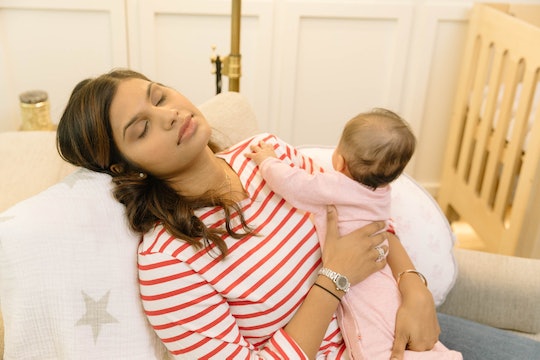 The level of tired a new mom experiences is nothing if not hellish. I'm pretty sure there isn't even a definition for this type of exhaustion. It's a hallucinogenic state and no amount of caffeine can remedy those dark circles beneath your eyes (believe me, I've tried). So it'd be cool if others didn't make things harder, including telling us new moms how we feel. That's why you can bet your you-know-what there are some things a new mom really hears when you tell her she's "just tired." Guys, it's not positive.

It took an insane amount of effort to feel somewhat normal in the days and months following my daughter's birth. After all, she was my first child and, up until then, my life had been fairly simple. So to say I was devastatingly tired when I was postpartum would be a drastic understatement. I knew I looked like crap, because I felt like it. I knew some conversations I had were incoherent, because I could feel my head spinning as I tried to speak. And I knew anything I said, or did, wouldn't be taken seriously. I knew people were quick to dismiss I feeling I had because, in the end, it was easy for them to blame fatigue.

After I was diagnosed of postpartum depression (PPD) I realized that was were actually red flags and warning signs were frequently ignored by friends and family members. To most people I was "just being tired" or "needed to rest." If my doctor decided not to continue asking questions to gauge how I was really feeling, I have no doubt my depression would have spiraled out of control. So with that in mind, and because tired or not we all deserve to be taken seriously, here's what a new mom actually hears when you tell her she's "just tired."