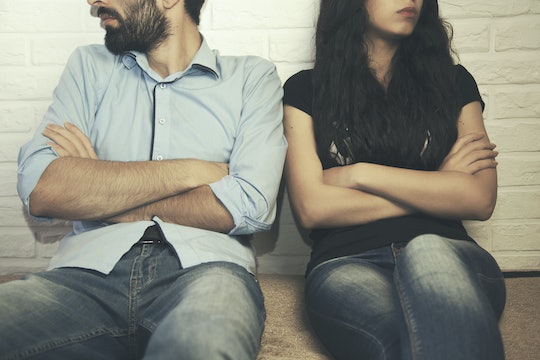 Divorce can be one of the ugliest moments in a couple's relationship. When kids are in the picture, it's even (arguably) worse. People don't go into a relationship believing separation is inevitable, but sometimes people grow a part and staying together is no longer feasible. A "broken family" isn't ideal, but having come from one made me into the strong, resolute woman I am today. There's some things I learned from my parent's divorce that I know have made me a better mom because I didn't — don't— want a relationship like the ones my parents had and ended. Actually, my desire to learn form my parents' collective mistakes is the greatest driving force throughout my marriage and in my parenting.

My mom and dad never had the ideal relationship. Pregnant with me by another man at such a young age, my easily-influenced mother accepted my father's proposal with hopes I would turn out to be his and that, maybe, they could have a secure, reliable future together. He's a loud, opinionated man, 10 years her senior, but he somehow managed to woo her. With an established job and already divorced from a previous marriage, my mom had many qualms about whether or not they were right for one another. It turns out, they weren't.

My first seven years on this planet were the equivalent of me trying to claw my way out of their volatile fishing net. Caught between nasty, sometimes abusive fights, I never felt safe or believed things could ever be OK in any way. Even after the arrival of my younger brother, the arguing escalated. About money. About my mom working. About where she worked. About daycare where we were sometimes left with incapable people who abused and mistreated us. About infidelity. Those times were filled with such disdain, it's a wonder I'd ever want to be in a relationship of my own.

When they finally divorced (thankfully), my brother and I were forced into an all-out custody war with my dad's tearfully asking us to choose him and my mom's sporadic boyfriends. Things were better when they were a apart and yet, at the same time, also worse. These memories feel only like drifting clouds. They hover, then they pass without ever going too far away. They're always with me, just beyond the surface, and truthfully, I'm grateful for that. Without these experiences, I'd be a whole different person with different world views, and different hopes and dreams. A lot of this formed my opinion of most everything. From men to work, and body image to feminism paving the path for how I'd raise my own children; all I knew was, if I were to ever become a parent, it'd contrast my parents in every way possible.

Now that I'm a mother of two beautiful children, I think back on those times with a sort of stinging, choked-up feeling. Part of me wishes I could've had it differently but the other part can't fathom who I'd be without the childhood I experienced. Some children of divorce go through an easier version of what I've described, but this is my truth. I know I'm a better mother for all the things my parents did and didn't do.

More Like This
6 Sex Positions To Reduce Leg Pain
Introducing My Boyfriend To My Kid
How To Support A NICU Parent, From Moms Who’ve Been There
Queen Elizabeth II's Most Romantic Quotes About Prince Philip