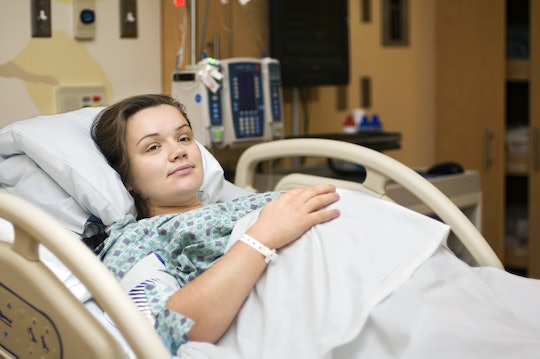 I never would've thought recovering from childbirth would be such a chore. I mean, I wasn't naive to all that would change (including but not limited to my body), I just didn't realize how much effort and time and energy it would take to feel like my "normal" self again. As a result, there are more than a few things I wish my partner said to me when I was recovering from childbirth that, I think and in the end, might've helped. At the very least, I think my emotional state, and our relationship, would have benefited.

After I had my daughter, I expected to be in pain because, well, childbirth hurts. There's no way around it, regardless of whether or not you choose an epidural. I also knew I'd be exhausted and learning the ropes of motherhood would be overwhelming. However, I severely underestimated the levels of pain and exhaustion and overwhelm I would actually experience. By a lot. Between breastfeeding issues, a fussy baby, and no sleep, I was hoping for a more supportive system when I returned from the hospital. I had family here and there, but I was really struggling to adjust to being a mom for a long, long time.

During this period, I was also on the verge of some serious emotional turmoil in the form of postpartum depression (PPD). My hormones were going crazy and, internally, it felt like I was on the verge of an epic meltdown. Back then, my partner did all he knew how, but here are some things I wish he'd said that might've made me feel less alone and heal a little faster: