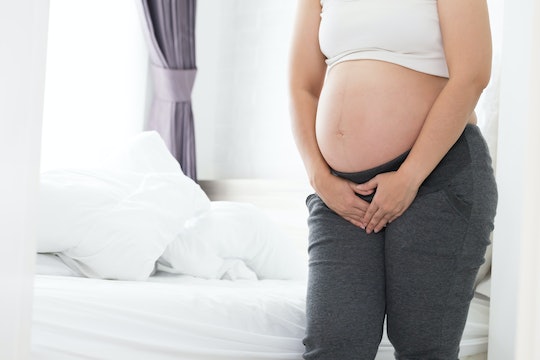 7 Things That Can Cause Lightning Crotch During Pregnancy

Pregnancy is full of "fun" surprises. While the journey itself can be nothing short of magnificent, there's bound to be a few moments that feel like anything but. From early first trimester nausea to something called lightning crotch, growing a baby can be uncomfortable, to say the least. And if you've ever experienced lightning crotch — a sudden, sharp pain in your vagina — you know it's as awful as it sounds. There are some things that can cause lightning crotch during pregnancy, too, so if you know them, I say try your best to avoid them at all costs. Then again, avoidance doesn't guarantee you'll miss out on this "fun" experience. Pregnancy is full of "fun" surprises, remember?

In both of my pregnancies, I experienced this out-of-nowhere-punch-you-in-the-vag pain, also known as the aforementioned lightning crotch, on a semi-regular basis. What's typically happening when you experience a "strike," according to Healthline, is your body's preparation for delivery. The baby's positioning as he or she descends into the birth canal adds more pressure on the cervix. The good news is that lightning crotch means you're getting closer to meeting your little one. The bad news is, well, it's not called "lightning crotch" for nothing.

For me, lightning crotch was always unexpected (like in the middle of dinner at a crowded restaurant), as if my body was trying to remind me that I was pregnant. And while it might feel like lightning crotch is your baby's way of telling you to get ready for the childbirth pain ahead, it can also be a sign of something more. So if you're experiencing lightning crotch, it's important not to ignore things like a fever, bleeding, abnormal discharge, fluid leakage, or bleeding. And in the meantime, read up on some of the things that can cause lightning crotch during pregnancy: