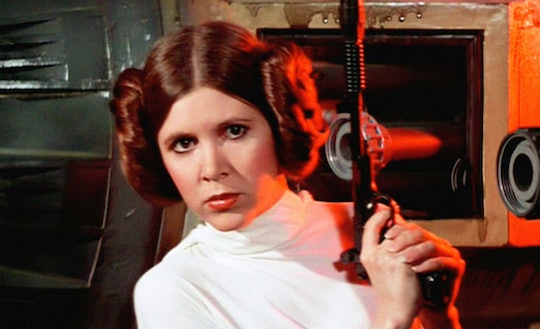 As a freckled-faced kid, I saw Princess Leia as the ultimate feminist role model. And as a slightly more freckled-face adult, I still do. Carrie Fisher as Princess Leia took the word princess and tore it up, redesigned it, and wore it like a queen. She sparkled with intelligence, wit, passion, and humor. She took charge, sought out answers, and demanded respect from everyone in the galaxy, especially her male cohorts. She assumed that everyone around her would treat her with respect.

Though it's been years since those iconic hair buns have a graced the big screen, Princess Leia remains of the most beloved and badass characters of the entire Star Wars franchise. And Carrie Fisher, the woman who plays her, only adds to the character's feminist power. After parents expressed outrage over a Princess Leia action figure, which showed the character in her infamous "slave" bikini, Fisher gave a perfect response. "Tell them that a giant slug captured me and forced me to wear that stupid outfit, and then I killed him because I didn’t like it," she told the Wall Street Journal. Not only did this response cement Fisher as a total badass, but it further proved that Princess Leia is not only a feminist icon in a galaxy far, far away, but one for those of us on Earth as well.

But, if you still need some convincing, here are seven ways Princess Leia has proven to be the ultimate feminist role model since making her debut in 1977.