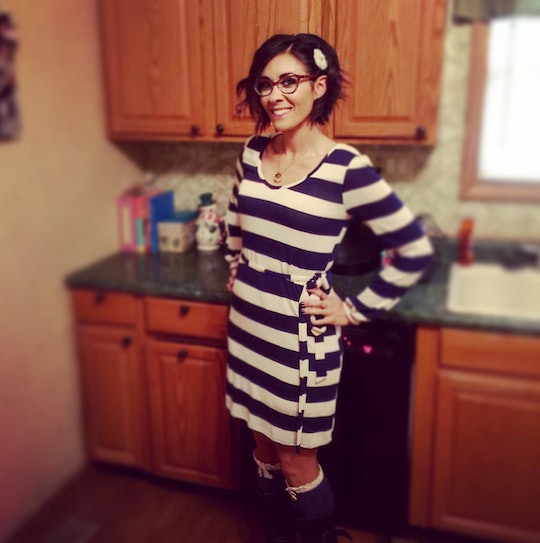 7 Ways My ED Changed How I Parent My Kids

Just the other day, I noticed my breakfast had to be three egg whites, or nothing at all. While this may not ring alarm bells to most, this sudden realization made me take pause. As someone who has battled an eating disorder since early childhood, I took the new food fixation as a warning sign. What's worse are the ways suffering through an eating disorder has changed the way I parent my kids, particularly while raising a 10-year-old girl who's so body conscious already.

As a girl who was fat shamed and labeled "obese" by her doctors, I didn't realize the roll food was playing in my turbulent childhood. I was raised by a plethora of women who were always crash dieting and exercising, so food (and how they "managed" it or "made up for it") was the focus of everything. I thought my relationship with food was "normal," because, based on my learned behaviors from those around me, it's all I knew. Even when kids at school poked fun at my soft body, dimples, and curves, nothing struck me as "wrong." Sure, I was self-conscious when I was 10, the age my daughter is now, but what pre-teen girl isn't? My body was shifting in ways I had no control over but, when it came to food, I only knew it as the enemy. An enemy I would turn to in times of desperation, and away from in times of triumph.

From an early age, I attended Weight Watchers meetings with my mom and grandmother regularly, both as a guest and a participant. I began counting calories before entering high school and, after my first real heartbreak, at 15 I became anorexic. The typical response to my drastic weight loss wasn't, "How can I help?" but, instead, "Wow, you look great." This only fed the monsters inside that would pester me from that point on, making my weight the center of my universe.

The thing about eating disorders is that you can't turn them on or off. Once you've endured them in any form, they're always lingering just beneath the surface, ready to pounce when you're at your weakest. There were plenty of times after high school when my anorexia laid dormant. I'd lose, gain, or maintain my weight in ways I'd liken to "average," but the moment something triggered my anxiety (like postpartum depression, my obsessive compulsive disorder, or a traumatic loss), I'd immediately fall back into my old, disordered patterns. Counting calories, food avoidance and restriction, and constantly weighing myself throughout the day were all warning signs I chose not to notice until it was too late.

In the summer of 2014, at a point when I was emotionally drained, anorexia took ahold of me again. This time I nearly stop eating completely. My meals were only a couple bites of whatever I had available, and I was exercising constantly. I'd reached my lowest weight ever and still never felt "thin enough" or, honestly, enough of anything. I knew I needed help.

Since then I've regained control and gained some of the weight back, but in healthy ways through strength training and making healthier food choices. Still, over the years I've noticed just how much having a disorder like this changes how I parent, and I can't help but wonder how things would be if I were "normal." In the end, though, I am who I am, which includes being the mother two my two children. The best I can do is maintain my vigilance, look for warning signs that my eating disorder may be resurfacing, and be kind to myself.