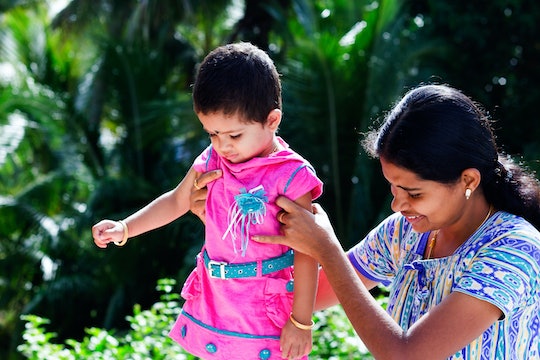 7 Ways To Explain Penises To Your Daughter, Because You Know She's Going To Ask

I received a lot of stereotypical, bad advice when I found out I was having a daughter, but the one I hated the most was, "with a boy, you only have to worry about one penis. With a girl, you have to worry about all of them." Terrible, right? And for two reasons. One, my daughter may be attracted to girls, so go ahead and drop this archaic "advice.: And two, why worry about penises? Look, I get the gist of the statement, but the world should be more concerned with learning ways to explain penises to your daughter and less on how to make her afraid of them.

I know, that's not a topic anyone is really excited to discuss. But it's completely necessary. Much like talking to your daughter about her own genitalia, you have to discuss the male anatomy. Why? Because she's going to ask you. One day she's going to see a little brother in the bath, or her baby cousin during a diaper change. She's going to ask about her body, and if Daddy has a vagina, too. She'll want to know where babies come from, how they get inside your belly, and hopefully, if you keep the conversation informative and helpful, you'll be the one she's questioning when she's ready to talk about that sex ed class.

So how do you take on this daunting task? Simple. Stop making it into such a big deal, because it's not.

You don't have any problems explaining your daughter's own anatomy to her (and if you do, that's a separate issue to discuss), so why should explaining a boy's be any different? A girl has a vagina, and a boy has a penis.

Now depending on their ages, you can get a little more detailed. And it's not because the conversation is inappropriate for little kids — they just may not understand any of what you're saying.

But you can't treat any conversation about male or female genitalia as gross, silly, or inappropriate. With those attitudes, you're setting your child up to think something is wrong with their body, and you're also leaving them in the dark when it comes to sex. If they get the understanding that it's hard for you to talk to them about penises, then how is your daughter supposed to talk to you about penises?

Don't be embarrassed or uncomfortable with the topic of penises. Your daughter needs to know what they are, not only for her own sexual health and curiosity of the human body, but to protect her from sexual assault as well. These seven tips can help you steer the conversation and make it informative, accurate, and appropriate.