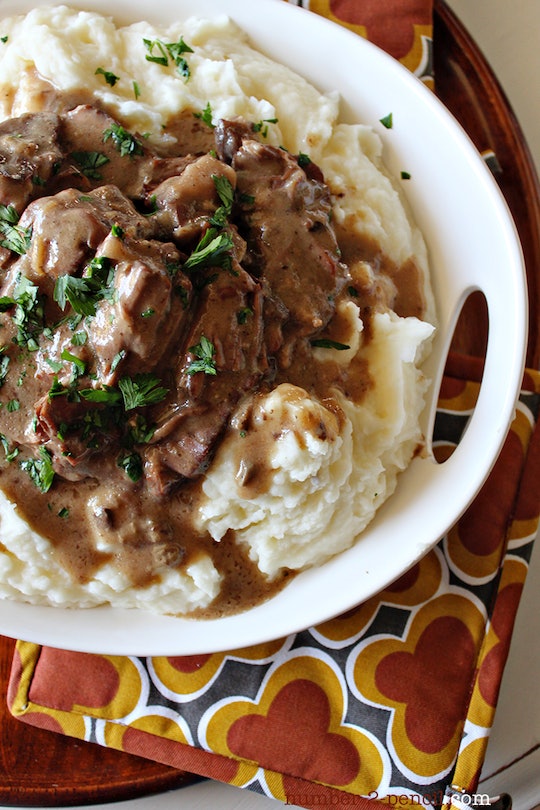 7 Ways To Turn Canned Soup Into A Mouth-Watering Meal

It's a Monday night, your kids are starving, and you are not willing to try any of those complicated Pinterest recipes. It's easy to pull out a can of cream of chicken soup, mix it with water, and call it a meal. And it is, sure. But without expending much energy or time, you can actually turn cans of soup into a spectacular dinner.

Whenever I'm trying to build up my pantry, I always count canned soup as a staple. Even if you're not a fan of enjoying the soups as a meal on their own, they are always great to have for a quick fix. The creaminess of the soup, plus all of the flavors, herbs, and spices make them your biggest dinner helpers.

Campbell's introduced cream of mushroom soup, one of their most popular products, back in 1934. But it wasn't until 1941, when the Campbell Test Kitchens opened, that the company began developing recipes using their condensed soups. And it makes sense, right? Using condensed soups for a recipe meant less time in the kitchen, saving on your grocery bill, and still having a hearty, delicious dinner for your family.

The 1950s are often discounted as being a time where most people focused on the convenience of food and the shelf-stable products that were used to make dinner. But you know what? I get it. I refuse to judge the mom who needs a can of condensed cream of chicken soup to whip up dinner. Especially if she was a mom back in the 50s and already had to spend an hour curling her hair before she could even think about breakfast.

So to honor all of us busy moms that just want to get dinner on the table, here are seven recipes, one for each night of your busy week, that turn canned soup into a spectacular dinner. And bonus? It's a dinner everyone at the table will eat. Always a win.

Perfect for a quick weeknight dinner, these mini pot pies from Averie Cooks use your favorite condensed potato soup and are totally versatile. Switch up the veggies, add some meat for a non-vegetarian option, and whip them up in just a few minutes.

Such a hearty delicious meal and it's made with just your pantry staples, including the condensed cream of mushroom soup you've been stockpiling. From No. 2 Pencil, this crock pot pot roast with gravy is so easy to make and is a great meal to throw in the crock pot before you leave for work.

Breakfast for dinner always sounds good, especially when you can make it with a can of cream of chicken soup. From Table for Two, this cheesy hashbrown casserole is totally decadent, delicious, and the ultimate comfort food. You can even prep it in advance and just toss it in the oven when you're ready.

Amazon
Back to Her Roots
1/2

This creamy tuna noodle casserole from Back to Her Roots is ready in no time by using a can of cream of celery soup for the base. Loaded with protein, it's a hearty meal for the whole family to enjoy.

By combining some kitchen staples like cream of chicken soup and a can of tomato sauce, you can create this lovely chicken spaghetti casserole from Cookies & Cups. The dish is also topped with grated cheddar cheese and breadcrumbs, so you're guaranteed to have a hot, ooey-gooey casserole of a dinner when it's all said and done.

If you've tried some fancier condensed soups before, then you're going to love this recipe. From Mama Harris's Kitchen, these chicken taco wonton cups are made with a Mexican style tomato soup, giving you the perfect finger food for a busy weeknight. This is the kind of delicious dinner you need when you're running late to soccer practice and common core math is making your head spin.

Stuffed peppers are always a yummy, versatile dish and they're made even easier when you use a can of cream of chicken soup. Mel's Kitchen Cafe has whipped up these cheesy chicken enchilada stuffed peppers. Although they're perfect for a busy night, they look just as fun to make when you have all the time in the world. (Meaning never, but it's the thought that counts.)

More Like This
The FDA Is Worried People Are Cooking Chicken In NyQuil
Eden Grinshpan On Getting Your Kids To Love Fish Eyeballs (Yes, Really!)
The Best Apple Orchards Near Upstate New York
Searching For Home As A Lifelong Renter