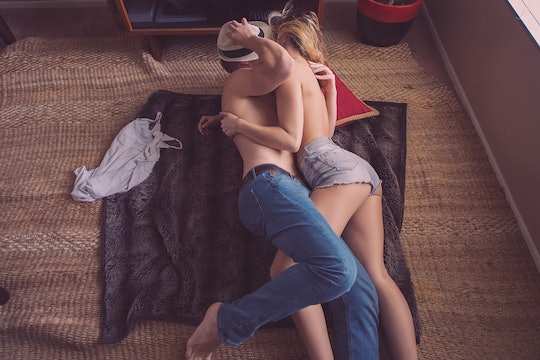 You've heard of hacks to make your mornings more productive. You've heard of hacks to help you be happier and healthier. But what about for your sex life? They're two concepts that aren't usually found together. Sex is meant to be "natural," right? It's supposed to happen easily between people, with sparks, and connection, and orgasms, right? Sometimes. But sometimes sex can be hard or awkward, and using a few weird hacks to make sex even better shouldn't make you feel guilty.

In fact, it should make you feel the opposite. Taking control of your sex life and your comfort with your own body via these simple (and kind of strange) hacks will empower you and give you confidence in bed. According to a study published in the Journal of Sex Research, more than 60 percent of women claimed they've faked an orgasm at least once. And although the reasons for faking an orgasm are many, and are often just symptoms of a deeper problem, most claimed that wanting sex to be over, not feeling comfortable or able to climax, or fear of letting their partner down was their motivation for not giving themselves the time and attention they deserve.

In a culture that shames women for being comfortable and confident about their sex life, it's no wonder that these simple hacks will seem revolutionary.