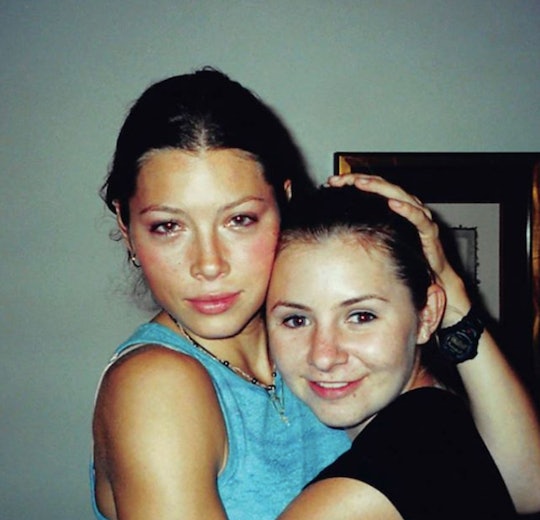 Growing up as a middle child, I looked for my identity a lot. That feels awkward to say when you know you were only 6 or 7, but I was always a kid who looked inward a lot. (Obviously because no one else was giving me any attention, duh.) I felt a lot of strength in some of the middle children stereotypes — peacemaker, people pleaser, sensitive — so seeing myself as a character on my favorite TV show? That was just the icing on the cake. Sure, Jan Brady was the original kid with middle child syndrome, but thanks to the '90s, I had a few more I could look up to, like Stephanie Tanner from Full House, Al Lambert from Step by Step, and of course, Lucy Camden from 7th Heaven.

I tell Beverley Mitchell, the actress who portrayed Lucy Camden for 11 seasons, this when I speak to her on the phone, and she's thrilled to hear it. "I love that! Yay! She's my spirit, too," Mitchell tells me. "Even though I'm an only child, I embraced that middle child life very well."

I have no problem being called Lucy Camden in the street, because it happens all the time. I own it.

And it's true — she did. In the early seasons, Lucy Camden is the quintessential middle child. Stuck between her older siblings, Matt and Mary, and her younger siblings, Simon and Ruthie, Lucy often has a tough time finding her place in the family. She is bubbly and popular (which proves that whole theory about middle children loving to be the center of attention), but she's also overly dramatic (check) and lets her emotions get the best of her (double check). Until she gains her footing midway through high school (around Season 4), Lucy also feels like she's under the shadow of big sister Mary, a feeling pretty much every middle child can relate to.

But it wasn't just about playing those middle child stereotypes — anyone can be sensitive and dramatic — but Mitchell managed to show Lucy's earnestness and her vulnerability in a way most non-middle children couldn't, and she's deeply proud of that. "I'm obviously very proud of the character Lucy. She's meaningful in my life — basically, she was my best friend growing up even though I played her. A lot of my life experiences are played through her, and yeah, I'm 100 percent filled with pride about what I created in that character and what I was able to give the world," she tells me. "I mean, I have no problem being called Lucy Camden in the street, because it happens all the time. I own it. I'm like, 'Hi, what? Oh Lucy? Yeah, that's me, too!' She'll always be a part of me."

But Mitchell isn't the only child actor who reminded me that being a middle child was totally OK. Fellow '90s child stars Jodie Sweetin and Christine Lakin played their own versions of classic middle kids as Stephanie Tanner in Full House and Al Lambert in Step by Step. The three actresses star in Hollywood Darlings, a comedy series that focuses on the bond they have stemming from being child actors in the '90s.

But their bond is more than just their shared experience. "I mean, we're a small group of people who did very strange things for jobs at a very young age. There's something that binds us together and creates an understanding for us that no one else gets," Mitchell says. But she clarifies that the reason she thinks Hollywood Darlings is so successful is because Sweetin, Lakin, and Mitchell just have so much fun together. "We understand each other. We get each other. There's a lot of time where conversation doesn't even have to be had and we can just look at each other and understand what we're thinking." But the funniest coincidence? While Sweetin, Lakin, and Mitchell played some of the most popular fictional middle children, all three of them grew up as only children.

"There's so many weird and emotional connections with the three of us," she says. "That's why it's so funny that we're the Hollywood Darlings. We're all only children, but we all played middle children, and we're only three days apart. Jodie's birthday is on January 19, I'm on January 22, and Christine is on January 25." Mitchell says that the connection between the three of them is something they can't explain, but it spreads to all child stars. "It's this weird sorority/fraternity situation, and even people that you weren't necessarily friends with way back when, the moment you kind of see each other now, there's this shared experience — like experience — that kind of bonds you even now."

And, like a typical middle child, that bond extends to her fictional siblings as well. Middle children are known for being the peace makers, the ones who want to keep everyone happy, and Mitchell definitely wants to keep the Camden family happy and centered. When asked if she would ever revisit the role again, she excitedly yells:

Heck yeah! I think it would be really fun to revisit and see what's going on with those Camden kids. I mean, we were always up to no good, so I would love to see what kind of trouble we got into. I mean our trouble was always super PG, but it would be fun. Obviously, I love my cast. I'm still very close with all the kids on the show. I see Barry, I see Mack, I see David, I see Jess, and we're all still very tight. Any excuse for us to have a reunion, I'm down.

Do you hear that, television? A 7th Heaven reunion is something that needs to happen. Although it's not like Mitchell is just totally bored sitting around all day and needs something to do. Other than filming Hollywood Darlings, which includes lots of nostalgia-induced press and fun, Mitchell is also a mom to two kids and spokesperson for the new Simply Delicious Morsels by Nestlé Toll House.

Mitchell says that Lucy Camden was her best friend growing up. For a lot of us, we feel the same about our beloved TV characters. I was (and still am) a sucker for television, so knowing that Mitchell and other actresses truly felt their characters in the same way I did is pretty amazing. It was more than just a job — it was bringing someone fully to life. And then passing them over to girls like me, who needed to feel a little more seen.

More Like This
33 A Charlie Brown Christmas Quotes To Fill You With Holiday Nostalgia
Jason Ritter's Family Cannot Appreciate His Culinary Talents
Macy’s Thanksgiving Day Parade Has Been Delighting Families Since 1924
Disney World's Giant Gingerbread House Was Made With Over 1,000 Pounds Of Honey