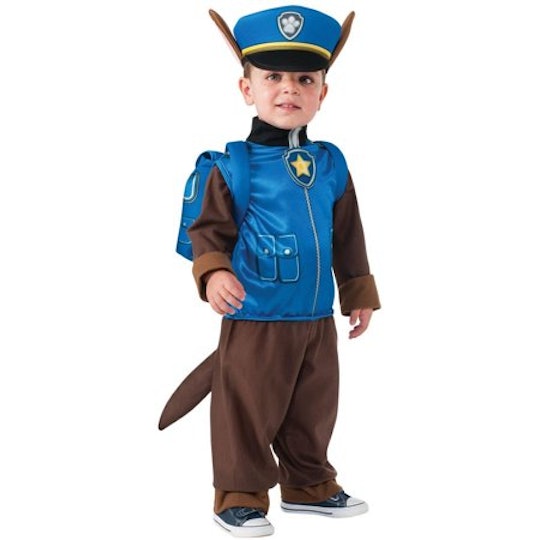 It's the middle of September, and we all know what that means: Our kids are starting to eye the Halloween displays and take a mental inventory of all the lollipops and mini-Twix bars they'll collect on that magical night. They may even be begging us to shop for a costume already, and in truth, that's not such a bad idea. Shopping early for popular kids' Halloween costumes will save you a lot of frantic store-hopping and long lines come late October, particularly if your child is set on being a member of the PAW Patrol this year.

Ever since its debut in the summer of 2013, PAW Patrol has earned millions for both its Toronto-based creators and for Nickelodeon, which airs the series in the United States, Financial Post reported. Its popularity no doubt stems from the perfect blending of puppy-dog cuteness and first-responder heroism: The main characters are all pups learning how to perform rescue missions, with the help of their teacher/commander, the human boy Ryder. With unique talents (Tracker has superb hearing; recycler Rocky can repurpose junk into helpful tools), the Patrol is prepared for any situation. So let those kids tote PAW Patrol backpacks and snuggle under PAW Patrol fuzzy blankets. Where role models are concerned, parents could do a lot worse.

If your child has their heart set on dressing as Marshall, Everest, or another helpful Paw Patrol friend, the first step is finding out once and for all which character they want to be. Then do a little comparison shopping to find out what costume option works best for you. Do you want the convenience of buying a complete pre-made outfit, or would you prefer to put together a costume out of less pricey components?

Whichever option you opt for, there are plenty of ways to ensure that your kids will be "ready for a ruff-ruff rescue" on Halloween. Take a look at these awesome buys.