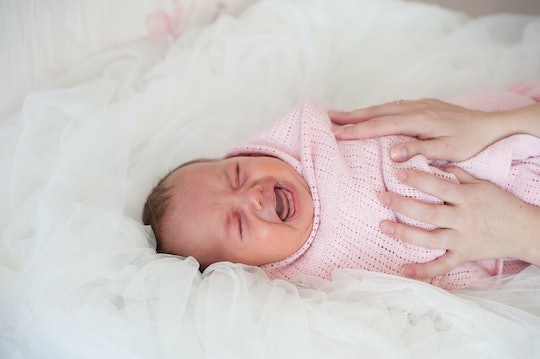 8 Emotional Struggles Of Having A Colicky Baby

Colic is brutal. When I brought my daughter home from the hospital, I was having issues breastfeeding, she had jaundice, and she wouldn't stop crying. I figured this was normal because, well, newborns cry, right? Then days went by and she didn't stop. She would cry for hours and I would cry right along with her. It was during the first few weeks of my daughters life that I learned all about the emotional struggles of having a colicky baby. I took her to the pediatrician fearing there was something wrong. His response? "Colic," he said. "Totally normal," he said. "Should stop within a few weeks," he said. A few weeks? At that time, as a brand new mom, "few weeks" seemed like an eternity. A few weeks of endless crying seemed like unjustified torture. An unfair punishment for motherhood itself.

Did you know it is nearly impossible to console a colicky baby? Nothing works. Some mothers swear by colic drops, baby massages, gripe water, and probiotics. I, however, tried it all and while some things offered temporary relief, nothing truly worked. That's how I knew my baby girl was experiencing true colic.

No one really knows what exactly causes colic. Some hypothesize the immature digestive system of a newborn is to blame, while others say the culprit is food allergies or sensitivities. Not matter what the issue is, however, colic is an emotional roller-coaster for the parents. It controls the entire house and, in a way, makes postpartum life that much more difficult.