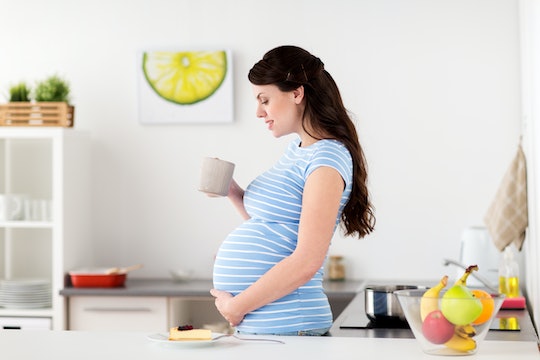 If The Smell Of Onions & These 7 Other Foods Ruins Your Pregnancy, You're Not Alone

The first trimester is known for being rough — morning sickness, a heightened sense of smell, and even aversion to certain foods can make eating during these three months extremely difficult. In fact, the most common pregnancy aversions are things women may eat every day before becoming pregnant, but suddenly can’t stand. They usually fall into three categories: smelly foods, fatty foods, or foods with an odd consistency.

Jason Van Bennekom, MD, OB-GYN at Baptist Health in Jacksonville, Florida, tells Romper in an interview that food aversion during pregnancy is fairly common. “It’s actually really common. At least 50 percent of people report having some sort of food aversion that is terribly bothersome. It may be closer to three quarters who experience it where it’s not that bothersome,” he explains.

Healthline.com noted that it’s even possible to have an aversion to these foods, or others, during the first trimester, and then crave them later in the pregnancy. Aversions usually begin in the first trimester, around the same time a woman begins experiencing morning sickness. Because of this, doctors believe the same hormone causing nausea may be causing aversions.

“Food aversions usually start in the first trimester, and they tend to mirror the onset of vomiting and nausea you get in early pregnancy. That pattern also mimics the rise and pattern in hCG [human chorionic gonadotropin]. We’re pretty confident that’s what causes a lot of the nausea and vomiting. Food aversion is not as clear-cut, but we think it’s probably related.”

So, why do aversions develop, anyway? One persistent theory is that it’s evolution’s way of keeping expectant mothers from eating something dangerous. “Some people think food aversions are there to avoid things that are bad for you, but there’s no science to say that’s true,” says Van Bennekom. “People will have aversions to things that are good for them and not things that are bad for them. A lot of people will talk about it as a protective mechanism, but there’s no evidence that that’s true. We think it’s associated with some of the hormonal, physiological changes that happen during pregnancy.”

Van Bennekom says some of those physiological changes include the heightened sense of smell during pregnancy, which can make more potent foods smell too intense. He says the GI tract also slows, taking a bit longer to digest than usual, which may contribute. And while none of these symptoms are enjoyable, they do mean the pregnancy is moving along as it should.

Most OB-GYNs do not try and treat food aversions, but rather focus on just making sure mother and baby are getting the nutrition they need in spite of not being able to eat certain foods. “In general, you sort of let it run its course. We try to look at if there’s something they’re going to miss out on if they don’t eat this or that, so if they’re not eating meats, we want to make sure they’re getting iron and protein. We’ll usually encourage them to find another source of that nutritional component and work around it rather than trying to power through it or treat it in any way,” Van Bennekom says.

Just like other side effects of pregnancy, food aversions should go away after the first trimester, or at least after delivery. “It typically improves by 14 to 16 weeks or so, but at least by 20 weeks it will resolve. But sometimes it continues during the whole pregnancy. If they persist, most physiological changes during pregnancy resolve by six weeks postpartum. We expect most food aversions would go away by then but some resolve faster than that.”