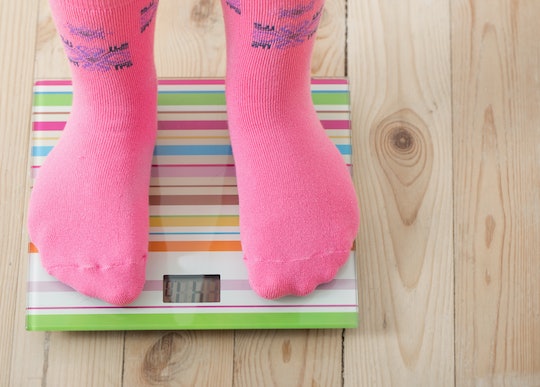 A person’s weight is a reflection of the force of Earth’s gravitational pull on their body. It’s not a reflection of their moral character, or how much attention they do or don’t pay to their health, or their worthiness as a person. People come in all shapes and sizes, babies and kids included, and their bodies have all sorts of reasons for why they end up weighing what they do. That’s something we all have to learn and help our kids understand, which is why I have a few rules for talking to my kid about their weight.

It’s my job as a mom to raise kids who can eventually take care of themselves, which includes making choices that help maintain their physical and mental health. They’ll need to know what their bodies need to feel their best (how much rest they need, the kinds and amount of movement that makes them happiest, the foods that leave them feeling satisfied and energized, and so much more) so when I talk to them about food and exercise, that's what I want them to pay attention to.

That’s also why we don’t talk very much about how much they weigh. We make a note of changes in their weight when they go to the doctor, because it’s definitely cool to see how much they’ve grown between visits, and sometimes it’s useful to know if they’re still small enough to go on certain rides or use certain toys, or if they’re almost big enough to move onto bigger ones. There is no magic number on a scale that can guarantee they will feel good, and trying to pursue such a number without paying attention to more important information (like how their minds and bodies feel and function) could do real damage to their health and well-being.

Ultimately, that’s the goal of body-positive parenting: raising kids who actually know how to take care of themselves rather than becoming obsessed with superficial information like weight and appearance, and who can accept themselves and others for who they are rather than what they look like. That’s why, when I talk to my kids (or anyone else’s) about weight, I keep the following rules in mind, and hope anyone else who talks to them about their weight will, too.