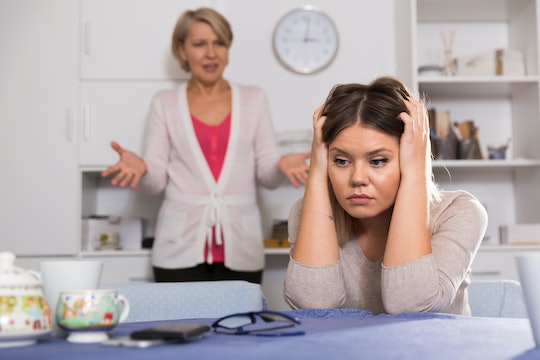 In a perfect world, all mother-child relationships would be respectful, mature, loving, and have a healthy balance of togetherness and independence. Sadly, the world isn't perfect, and many women endure rather turbulent, guilt-ridden, dramatic, or just plain dysfunctional relationship with their moms. If any of the aforementioned sounds eerily familiar, it could be time to look for the signs a mother has dependent personality disorder.

Personality disorders are mental conditions that involve unhealthy and unchanging thoughts and beliefs about oneself and others, according to the Mayo Clinic. There are three general categories of personality disorders: Cluster A, which manifests in paranoid or schizoid behavior; Cluster B, which is characterized by dramatic, narcissistic, or antisocial behavior; and Cluster C, the disorders stemming from irrational fears and anxiety. Dependent personality disorder, or DPD, falls into Cluster C.

DPD, according to the Encyclopedia of Mental Disorders (as reported by the Mind Disorders website), "is characterized by an excessive need to be taken care of or depend upon others." One of the more common personality disorders, DPD occurs in about 0.5 percent of the population, according to PsychCentral. But when it's your own mom who's affected, it's easy to feel as though you're the only one dealing with this stressful relationship. These are some of the key signs that your mother may have DPD: