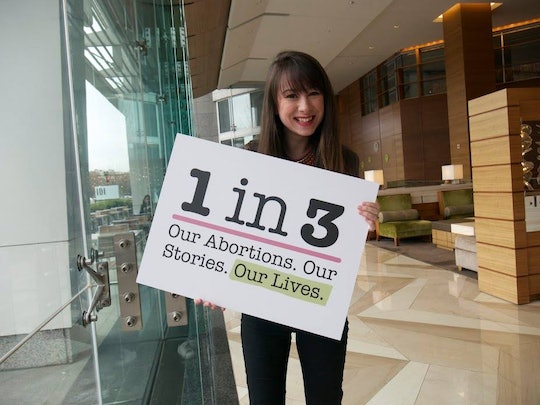 Like many other women across the United States, I am a mom who has had an abortion. I am not ashamed of my decision to terminate a pregnancy before I was ready, willing, and able to be a mother, and it's a medical decision I have discussed at great length with literally thousands of people numerous times. But moms aren't always supported in their choice to have an abortion, just like many other people who seek out abortion care when they need it. Instead, we face unnecessary roadblocks, shame, stigma, and judgment. Well, I say enough.

Abortion is a safe, common, legal medical procedure. In fact, it's much safer than most other common medical procedures. "As an example, the mortality rate associated with a colonoscopy is more than 40 times greater than that of an abortion," Jeanne Conry, former president of the American College of Obstetricians and Gynecologists, told Kaiser Health News. Yet the anti-choice movement and its advocates peddle falsehoods about not only the safety of an abortion procedure, but the type of people who choose abortion for themselves. From claiming people who have abortions are selfish to swearing they're irresponsible to assuming they never want children, there's a slew of misconceptions people face when terminating a pregnancy.

But according to the Guttmacher Institute, 59 percent of the women obtaining abortions are already mothers. And of the 24 percent of women who will have an abortion by age 45, 51 percent were using contraception, nearly half were living with a partner when they became pregnant, and 14 percent were married. A reported 66 percent of women who've terminated a pregnancy " "plan to have children when they are older, financially able to provide necessities for them, and/or in a supportive relationship with a partner so their children will have two parents," according to a report published by the National Abortion Federation (NAF). So chances are what you're hearing about mothers who've had abortion is not only inaccurate, but potentially damaging to the individual who has decided to make her own personal, medical decision. So with that in mind, and as a woman who had an abortion and went on to have a healthy, happy son, here's what we need to start saying — loudly — about moms who terminate their pregnancies: