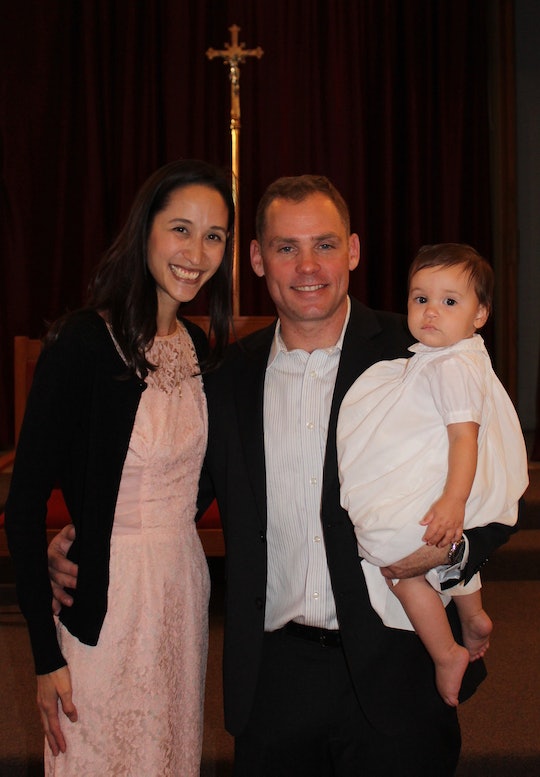 Questions To Ask Before You Baptize Your Baby

Baptism by water is a sacrament that dates back to the very beginning of the Christian church. In some denominations, baptism is a requirement for salvation, while others view it as initiation into the church. For many families, whether or not to baptize their baby is an important conversation. This is particularly true for interfaith couples, as well as couples in which one partner is a believer and one is not. With a diversity of religious traditions, as well as a range of beliefs within families, there are certain things you should ask your partner before you baptize your baby.

I have a somewhat complicated history with religion, although I expect that's a fairly common experience. Growing up, I went to vacation bible school and attended a Methodist church on occasion. Eventually, we settled on a Lutheran church where I was baptized at the age of 13. I remember attending youth group meetings, "lock-ins," and even a "purity" seminar (spoiler: it didn't work).

I felt like something was lacking, so in search of the missing piece, I chose a Christian college after high school. There, the pressure to conform and the general intolerance of diverse thoughts and opinions by the student body drove me from religion entirely. I had a brief resurgence of faith during my volunteer year in Honduras, when I was regularly attending mass, but I think what I really liked was the ritual and community.

Now, in my 30s, atheism seems the best fit for me. Personally, Christianity doesn't sufficiently explain suffering in the world, and it's history is pretty ugly. Currently, especially among conservative Christians, I see a lot of hypocrisy (e.g. railing against abortion but opposing birth control and universal access to healthcare). I also can't get behind any faith that claims to be the one true church, damning the rest of the world to hell.

My husband is nominally Catholic. He grew up in the church, and it's something I think he'd like to go back to eventually. Before we even had children, we established that they would be raised Catholic. I agreed to this on the condition that I would not regularly attend church, that I would answer honestly if asked about my convictions, and that when they were old enough, they would be allowed to decide whether or not to continue their religious education. Although there are parts of the Catholic Church that give me serious pause (specifically, their history of sexual abuse), I respect Pope Francis, the Jesuits, and the church's work toward social justice.

Whether you're the religious partner or not, or even if you both are, there are some ground rules you'll want to establish before your baby's baptism.