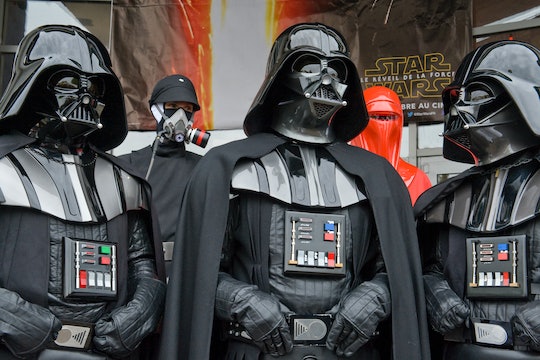 I took my sons out of school early so they could see Star Wars: The Force Awakens on opening day. We found out at the last minute there would be a surprise 3 p.m. showing and played a little hooky together. It was one of my best days ever. My boys and I are what I like to call "fan folk." The entire Star Wars series, Game of Thrones, all things Batman (the Christopher Nolan trilogy especially)... we are a devoted bunch. And I can tell you from experience that being a parent who is a true Star Wars fan has stacked up to some pretty solid parenting wins for me.

Fans all over the world are celebrated Star Wars Day on Wednesday (May the Fourth be with you), from dressing up as a Wookie to go to work, to dining on Star Wars-shaped edibles and hosting movie marathons, it's pretty clear that the Force is alive and well all over the world. So how do you apply that to parenting, you ask? Well, one of the tricks is to really be a fan yourself. Kids can always tell when you're faking it (the amount of times I've pretended to like Caillou and the kids called me out on it, I can't even tell you). So if you're already a fan of Star Wars and also a fan of your kids, it's a win-win situation if you just let your fan flag fly and embrace being a geek. Here are a few solid reasons being a Star Wars parent rocks.

You'll Always Have Something to Talk About

Truth time here: some day your kids might feel like strangers to you. Their interests will veer away from things like sleeping in your lap or drawing you pictures and steer towards the murky waters of adolescence. Their main goal will essentially be not talking to you. Unless... you know way more about their favorite movies than anyone else. They still might not talk your ear off, but you'll have some common ground, right?

Their Friends Will Love You

So your kids and their friends are hanging out with their light sabers, planning an attack on the Dagobah system, when you casually remind them that Jedi Master Yoda spent his twilight years in the swampy territory and it would be a sign of disrespect to attack. You give them a few other planets that might need to be liberated from Imperial forces and then go to your room for a series of high-fives with yourself. Yeah, that's right.

You Can Take A Break From All The Adulting

Parenting and adulting are two different things, guys. And sometimes I think adulting gets in the way of some pretty fine parenting. Example? Last summer Jaws was re-released on the big screen, so we spent a hot sunny afternoon in the theater watching the horror classic and then drove to the beach for a little night swimming. 'Twas magnificent. Give adulting a break every once in a while and have some fun.

You'll Never Have To Worry About Your Wardrobe

Who doesn't want to wear a floor-length white turtleneck with hamburger shaped buns on her head? Really, who?

Worried A Day At The Office Is Going To Suck Up All Your Creativity? Worry No More!

Sometimes working in an office is not the 24-7 fun factory we were promised as diligent students growing up. Being "fan folk" gives you an outlet; even more so when you have little fan folk waiting for you at home. Every bedtime story you read and every game you play can be remolded to suit your fan purposes. Try retelling the original story of Luke Skywalker to your kids tonight... but make them the star. It's super easy, super satisfying, and a good time will be had by all.

All Life Lessons Can Be Applied To Star Wars

Birthday Parties, Halloween and Family Holidays Will Be Easier To Plan

I could make a fortune selling light sabers, Jedi robes and clip on Padawan braids on Ebay. I have baked a Death Star cake, Stormtrooper cookies, Darth Vader pancakes, and more. And can we even discuss all of the decorating possibilities for your kids' rooms? They could sleep in a Millenium Falcom — just think about that for a minute.

Be honest; despite everyone probably warning you not to be friends with your kids... you want to be friends with your kids. It's fun. They can be fun people — my kids are genuinely a good time. So yes, maybe I shouldn't have taken them out of school to see a movie or taken them to Jedi training camp or allowed them to wear lightsabers like accessories. But you know what? It was totally worth it.

May the fourth be with you.