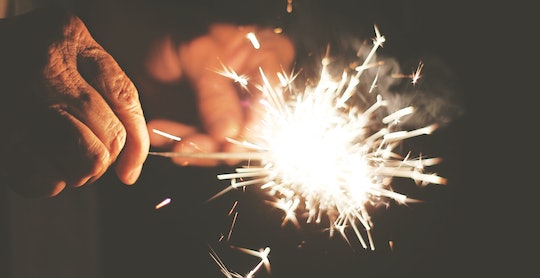 New Year's Eve is one of my favorite nights of the year. It's my reward for making it through the holiday season; It's a celebration that starts with alcoholic beverages and glamorous dresses, and ends with fireworks and kisses; It's a night of unapologetic hope. I've spent my fair share of New Years' Eves standing in a crowded party with five-inch heels on, kissing a dear friend or a former lover and silently telling myself that this new year will be better than the last. Sometimes that was true, sometimes it wasn't, but regardless of how any year turned out, it didn't stop me from making promises I did, or did not, keep.

Now that I'm a mother, I spend my New Year's Eve a little differently.

There are no more glamorous dresses, although the alcoholic beverages are still around. My son is 1.5 years old so there are no fireworks, but instead of kissing one boy, I now kiss two (albeit one of those kisses is on the head of a snoozing toddler). I don't stand in the middle of crowded parties with heels on and count down the final seconds of the year; I'm usually in sweats on my couch, watching the ball drop in Times Square and counting down with my partner. But one thing hasn't changed, and that is my unapologetic hope. I still hope that the next year will be better than the previous and I still make promises and resolutions that I think will assist that wish into becoming a reality — even if those promises are completely unrealistic.

Two or three weeks into every new year, the majority of resolutions are ditched, out of convenience or exhaustion or just habit. Of course, that doesn't keep me from making them, as this year or any future year comes to an end. That's, arguably, one of the best parts about New Year's Eve: For a few seconds of an iconic countdown, I get to pretend that these promises are perfectly attainable. Here are the ones that I — and I have to believe, most moms — make every year, and believe for a beautiful moment, no matter how totally unrealistic they actually are.