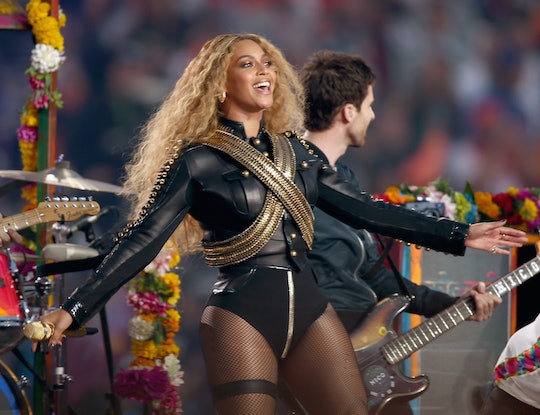 After dropping a fresh single and blowing the Super Bowl halftime show out of the water, Beyoncé is on everyone's mind. To say she's powerful would be an understatement, and to say I'd like to spend Valentine's Day with her might be a little stalkerish. (Seriously though, if someone could arrange that, I could die a happy woman.) But because I'm pretty sure that's never going to happen, I'll have to console myself with an abundance of Beyoncé Valentine's Day memes. I mean, what better way to spend V-Day than figuring out how to buy Formation World Tour tickets while simultaneously staring at her beautiful face.

And I know I'm not the only one who'd like to spend Feb. 14 with Beyoncé. We are a nation ob(ey)sessed. (OK, I might've taken that one too far.) I mean, the woman dropped Red Lobster in a verse and their sales went up 33 percent. What other singer has that sort of sale slaying power? If you don't have anyone to take to Red Lobster this weekend or gift a bottle of hot sauce to, feel free to kick back with "Formation" on repeat and enjoy the greatest gift the Internet has to offer — Beyoncé-themed Valentine's Day memes.