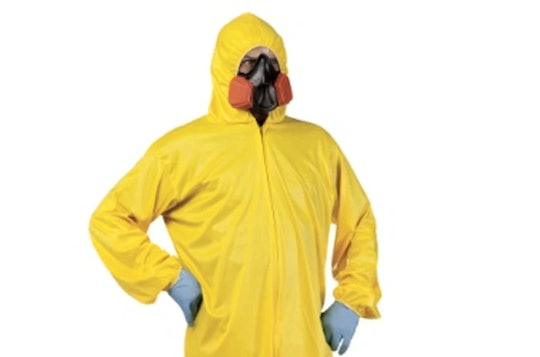 With the new Breaking Bad movie, El Camino, now on Netflix, everything is feeling very 2013 again. Which means — yes — a resurgence of people trick-or-treating in yellow hazmat suits. Below, I give you nine amazing Breaking Bad Halloween costume ideas.

Remember 2013? Obama was still prez. The song "Blurred Lines" blasted in every H&M across the land. Kris Jenner had just separated from a man named Bruce. And Walter White finally ended his career as America's favorite purveyor of crystal meth.

I personally adored Heisenberg and Pinkman and their zany meth-dealing hijinks. Whenever "Baby Blue" rolls around on my iTunes I make sure to pause and nostalgically remember what a fantastic show it was. Like many fans, I was nervous about how El Camino would hold up against the rest of the series. I shan't say anything here, as I don't want to spoil it for anyone who hasn't watched yet, but I am happy to say that Jesse doesn't wake up to discover he is actually now part robot, reconstructed in a lab by Walter. Nor does he wake up and discover that he actually is Walter, and Walter only existed in his imagination the entire time. So no need to worry about either of those scenarios.

But back to the fun costume ideas! I've rounded up some homemade get-ups as well as some ready-mades. Note: I do discourage you from dressing your small child as a mini-Walt. While the allure of putting one's kid in a pork pie hat can be quite strong, not everyone is on board with babies posing as meth dealers. If you've already in fact purchased a child-sized pork pie, well, you could always make them carry around a high-backed wooden chair and tell everyone they're a little Frank Lloyd Wright? I mean what toddler doesn't love organic architecture?