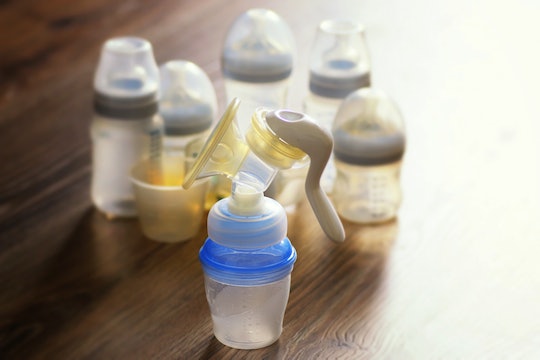 There are few things worse than panicking about breastfeeding, especially when you hear so many breastfeeding supply myths. I can't tell you how many people told me while I was pregnant that I was either going to have an easy time breastfeeding ("You already have big boobs, you probably won't have an issue") or that there was a good chance I was going to have a low milk supply. ("Most people do, you know, so you should start taking herbs now.")

But all these myths do is perpetuate the fear that moms aren't able to breastfeed or that they are going to have serious difficulties when they try. In turn, those myths could be to blame for why so many women give up breastfeeding. According to the Centers for Disease Control and Prevention, the amount of breastfed babies at birth drops to nearly half by the time the baby reaches 6 months old. By a year old, the number has slashed in half again with only 22.7 percent of babies still being breastfed at their first birthday.

Whether it's because of a lack of support from employers, family members, and healthcare professionals or because they have been swayed by falsities concerning breastfeeding, it's important to know the truth behind these nine breastfeeding supply myths. Use them to educate yourself and to offer support to those around you who may be struggling or worried about their supply.

More Like This
This Is What Happens To Your Vagina When You Stop Having Sex
Your C-Section Scar: Healing & Care Basics
9 Surprising Signs You Might Have A Sugar Intolerance
Can You Do Zumba While Pregnant? Experts Weigh In