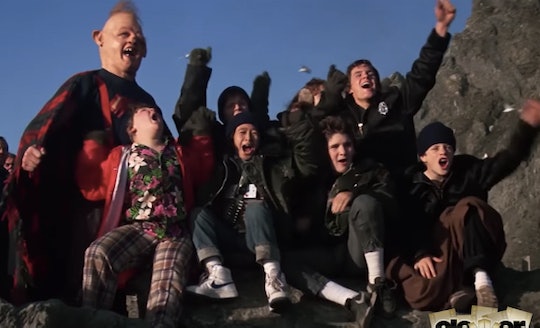 9 'Goonies' Parenting Lessons Everyone Can Use In Their Own Lives

It has been 31 years to the day since The Goonies was unleashed on the world. And I just don't know how to feel about that. Has it really been 31 years since we first saw Bran (also known as Josh Brolin) in his gym shorts-over-trackpants combo that occupied many a pre-sleep fantasy for this girl right here? Say it ain't so. In honor of this auspicious day — hencefoth known as Goonies day — let's look back at the nine times The Goonies gave us some super relatable parenting lessons. (Despite the fact that their parents were essentially nowhere to be seen for most of the movie.)

So here's a short rundown of the movie for those of you who haven't caught it yet — and a little fyi, there are rumors swirling of a sequel in the making, so you might want to catch the first as a little bit of research: There are these four friends who need to find some treasure to save their doomed neighborhood. One of them, Mikey (aka Sean Astin), has a treasure map from One-Eyed Willie, a pirate who was known to frequent the area. He also has a very beautiful older brother named Bran who was the main draw for some of us.

The four boys plus Bran and a few girls go looking for treasure, meet up with a family of cold blooded killers and generally have a rocking good time. They also meet Sloth, but we'll get to him later.

So how does that plot spell parenting lessons, you ask? Well, the lessons don't really come from the parents. They aren't around, which means the kids can get into all sorts of hijinks. But these kids parent each other like nobody's business. I learned a lot from them... and so will you, I promise.

More Like This
WowWee’s New Fairy Finders Will Keep Kids Distracted For Hours
The Covid Vaccine For Kids Under 5 Has Been Sent To The FDA For Review
Ryan Reynolds Jokes His Daughters Are So “Wild,” He Thinks “They Have Rabies Sometimes”
Jenny Slate Played Our Parenting Edition Of Never Have I Ever & Here’s What We Learned