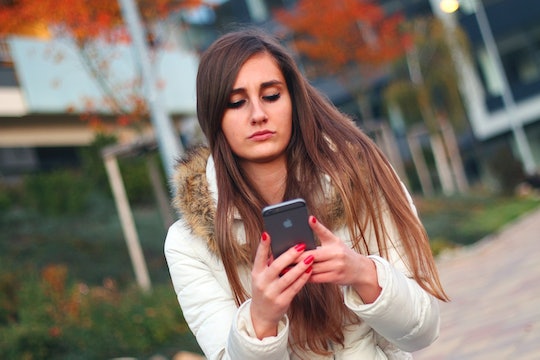 9 Men Reveal The Surprising Reasons Why They Ghost

In today's dating world, something that happens quite often is ghosting. You meet someone who has potential, text back and forth, maybe go out, and suddenly they disappear. They stop replying to texts, and you never hear from them again. Often the frustration doesn't come from the idea someone doesn't want to be with you, it's the fact they don't have the courtesy to communicate it. So in an effort to find out why, Romper did some digging for reasons a guy will ghost on you.

Although there are plenty of reasons someone may ghost you, surprisingly most of them had nothing to do with the person being ghosted. Instead, it's comforting to remember that someone may ghost you because of their own personal issues, and holding yourself accountable really isn't necessary.

Whether you feel it's something you've done, a personality trait that's making you incompatible, or a personal issue on the other party's end, there are a few common reasons Romper gathered as to why guys feel the need to ghost. Although ghosting, in my opinion, is far from the most upstanding way to cut ties with someone, there's no denying it's becoming more and more common. So, check out some of the reasons why here.