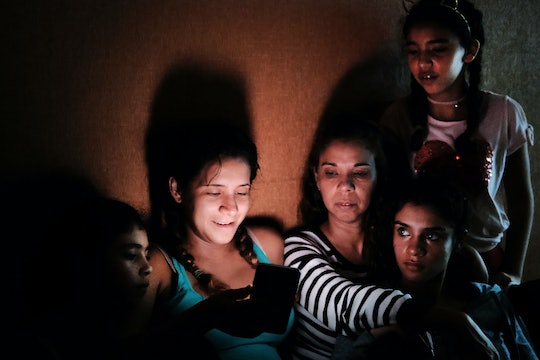 9 Power Outage Games For Kids To Utilize During Hurricane Season

Hurricane season has officially arrived, and as the east coast is preparing for Hurricane Florence, the country's collective attention is turning to emergency preparedness and what to do in the event of a weather evacuation. At the bottom of an evacuation checklist, at least for most parents, are tried and true power outage games for kids. It definitely doesn't hurt to be prepared for the hours, or days, of electricity-free family time ahead.

Hurricane Florence is projected to hit North and South Carolina, potentially leaving up to 3 million people without power, according to The New York Times. Duke Energy, the leading power supplier for both states, told The New York Times it could take several weeks to restore power to the areas impacted by the hurricane. In other words, thousands if not millions of families are preparing to spend some quality time together in the dark, which isn't always an easy feat when you have young children to entertain.

According to Ready.gov, in the event of a power outage you should keep freezers and refrigerators closed, only use generators outdoors and away from windows, avoid using gat heat, disconnect all appliances from electrical outlets, and check on your neighbors. When your safety bases are covered, try the following power outage games to keep you and the family occupied:

More Like This
Tips For Apple Picking With Kids
If Breastfeeding Makes You Tired, Here’s How To Keep Your Energy Up
These 9 Potty Training Techniques Will Work On Even The Most Stubborn Toddler
Here's How To Handle Potty Training During Nap Time