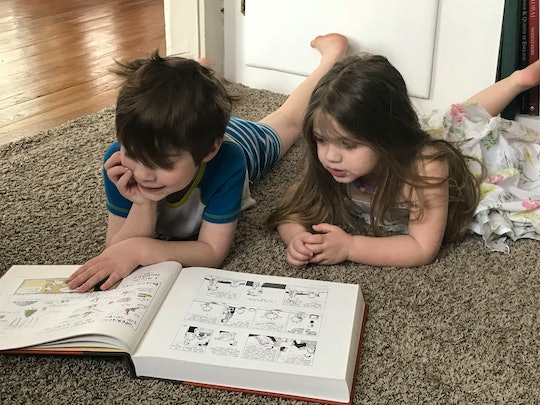 I Want To Play With My Kids, But Here's Why I Hold Myself Back

It's winter in Connecticut and that means freezing temperatures, frequent snow, and not much playing outside. As a work-from-home mom, I see a lot of my kids, but this time of the year I see a lot of my kids. In fact, as I speak my son is on the couch playing a video game and my daughter is in the kitchen with a snack. In five minutes they'll both be done with their respective activity and they'll go play. I want to play with them, but I won't, and not just because I have things to do and obligations to meet and emails to answer.

Recently my colleague/girl-bro Dina Leygerman recently wrote about the fact that she doesn't play with her kids. In her article, Leygerman explains, writing:

I watch moms and dads at the playground — chasing their kids around, creating fun games for them to play together, collecting rocks and digging in dirt — while I sit on the bench and wonder which part of the playground my kids are at. I watch these parents with a bit of envy, to be honest, because I don't really understand why I can't be more like them. Why can't I enjoy playing with my kids? Why do I wish, sometimes more than anything, that they'd stop asking me to play with them? Maybe something is wrong with me, because I hate pretend-play. I've tried to like it, you guys, but I've failed.

But to Leygerman, and the moms like her, I say this without an ounce of smug humblebragging: I am the mom running around playing with her kids. Zero judgment to anyone who doesn't, but I genuinely do enjoy it.

I have the soul of a 4-year-old girl. Well, at least half the time. I have a kind of frenetic, dopey enthusiasm that is well-suited to children's games. Like, I'm a 35-year-old grown-ass woman, but if there's a big trampoline in someone's back yard I literally squeal, run toward it (arms flailing, obviously) and jump for a solid hour. I like pretending, I like doing weird voices, and I like creating characters for stuffed animals and dramatic scenarios for action figures. I find that the standard kid stuff is a fun distraction from all the responsibilities I have to meet as an adult.

Yes, playing with children can't be terrifically boring. I've definitely seen my kids approach me with armfuls of toys and shuddered or frantically tried to find a chore to do. Sometimes I'm just not in the mood. And even under the best circumstances there's only so long I can listen to my 6-year-old son drone on about different kinds of Pokémon or re-enact the same five-second scene from Tangled over and over and over again with my 3-year-old daughter. I may have the soul of a preschooler, but I still have the brain of a grown-ass woman, so even my childlike enthusiasm has a limit. But, generally speaking, I'm usually down for a good session of make-believe or Star Wars figures, at least for a little while.

As they get older, my services are required and requested less and less. So I'm faced with the decision: do I go up and play with them, even though I haven't been summoned, or do I actually take a few minutes to sit down with a book?

I'm also sentimental. For example, the other night my husband said, "You know, if our son leaves home at 18 we're already a third of the way done with our time living with him." I immediately responded, sobbing, "Why the f*ck would you say that to me, you monster?!" And yet the monster is correct. I know I only have a few years with my children, and I have an even shorter time with my children as children. I won't always get to have pretend tea parties with them. In a few years they'll stop thinking the characters I create for their Lego mini-figures are funny. And while I'm not one of those parents who dreads having older kids or teenagers, I know that as exciting as growing up is, I'll be leaving behind something special, too. I want to savor each stage of development to the best of my ability.

But something has happened in the last year, and especially in the last few months: my kids don't need me. I mean, yes, they'll always need me because I'm their mom, but up until recently they've often relied on me to guide a game for them or mediate their play because the younger one doesn't understand what to do without parental guidance. As they get older, my services are required and requested less and less. So I'm faced with the decision: do I go up and play with them, even though I haven't been summoned, or do I actually take a few minutes to sit down with a book?

More and more, I'm choosing to hunker down with a book; a deliberate and often difficult decision. Like I said, I enjoy playing with them, either individually or together. And they're still at an age where I could jump in on whatever it is they're doing and they'd be down with it. But I hold back, an and for a number of reasons.

The first has to do with my own childhood. I'm one of five siblings and when I think back about what that was like, most of my memories are playing without direct parental supervision. It's not like we were left to fend for ourselves a la Naked and Afraid, but we were mostly left to our own devices and it was awesome. We created all kinds of weird characters. We invented elaborate Barbie dramas. We built our own Jurassic Park because it was the '90s and we figured it was only a matter of time before a real park came along, so we should be prepared. (OK, it was just our toy dinosaurs stuck behind Lincoln Log fences, but it was awesome.)

Yes, our parents still played with us. My mom, in particular, was great at helping us name all our Troll dolls. ("Twiddle McFiddle"? Genius.) But most of the time we played with each other and the rapport we developed is a direct result of that one-on-one interaction. I want my children to have that, too. I also want them to develop the creativity, independence, and myriad inside jokes that can only come from children playing with children (or children playing on their own, for that matter).

I want them to be able to learn problem-solving skills and constructive communication. This often means that I listen to them scream at each other for extended periods of time. That's not my idea of fun, to be sure, but since I've been holding back from rushing to their aid those "discussions" have become less and less frequent and end more quickly. It's almost as if they're learning.

For the first time in six years I can sit with a quiet cup of tea from time to time.

It's not like I ignore WWIII breaking out in their room. Many a time I've had to trudge up to their room and mediate a dispute over a toy lamb that literally no one cared about five minutes ago. But I've been pleasantly surprised to learn that if I don't swoop in right away, they can usually come up with solutions on their own. This wouldn't happen if I was directly involved. They would (not unreasonably) immediately turn to me to come up with a fair solution. So as tough as it is to keep myself from jumping into their playtime, it's so amazing to be able to see my children solve their own problems.

And do you know who else deserves some independence? Me.Adult-free playtime has a lot of wonderful benefits for my children, and it also facilitates child-free adult time. For the first time in six years I can sit with a quiet cup of tea from time to time. I can occasionally get a chore done without gently but firmly moving little bodies out of the way every three seconds. I can sit down in my comfy chair and read a book. I still enjoy hunkering down on the rug and playing with my kids every day, but I've given myself permission to find time for myself while they entertain themselves. Not only is it good for them, but I've earned it. And while I know my time playing dolls and Legos with them is finite, it's because of that that I am intentionally making time for myself.

I don't want to be lost without them when they no longer require as much of me.