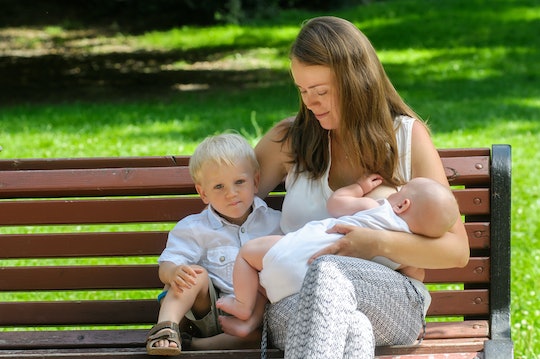 It should go without saying, but I'll say it anyway because apparently society as whole is, well, slow to learn: breasts aren't inherently sexual, and breastfeeding is not a sexual act. Still, I could repeat the aforementioned until words no longer made sense, and society, as of right now, would still have major hang-ups about nudity and bodies in general. As a mother, I've learned that being sex-positive can help you get through breastfeeding in public with, you know, comes in handy more times than I'm willing to admit.

Sex positivity is simply the belief that sexual activity is normal, healthy, and OK, as long as it's practiced safely and with all parties' enthusiastic consent. Like those who embrace the somewhat related concept of body positivity, folks who take a sex positive approach to life don't assume that there's anything about the body, or the sexual things bodies can do, that's inherently wrong or bad, as long as it's acceptable to everyone directly involved.

As with anything, breastfeeding parents should cover or not cover to their comfort level, and parents shouldn’t feel obligated to nurse, in public or at all. (There’s another lesson that carries over from our adventures in sex-positivity: consent and bodily autonomy are everything.) However, if you’ve decided to take the unapologetic public breastfeeding path, there’s good news for you. For starters, negativity around public nursing is getting less and less common as more people remember that breasts have a purpose beyond, you know, selling beer and cars and stuff. Of course, this doesn't mean that women aren't still being shamed (and in truly horrific ways) but f you're a sex positive nursing parent, you'll have a head start on navigating any potential judgment or awkwardness you do encounter, because:

More Like This
12 Genius Floats With Canopies (& Cupholders), So You Never Have To Leave The Pool
Stepmom Quotes & Sayings For Every Occasion
From Captions To Gifts, These Are All The Kindergarten Graduation Ideas You Need
Here’s What You Need To Know About That Viral 1960s Baby Formula “Recipe”