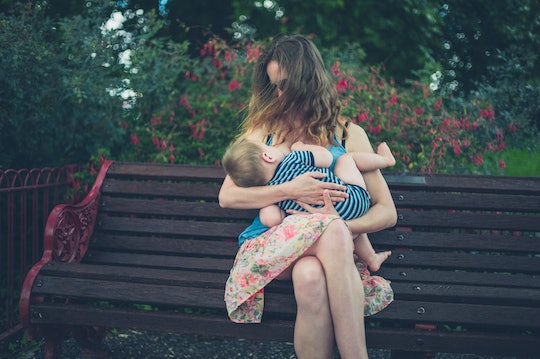 I Don't Like Breastfeeding In Public. There, I Said It.

I'm sitting at the food court of my local mall in the liberal city of Seattle, WA. I'm three-months postpartum, holding my infant son while he happily eats. I've been successful breastfeeding since he was born; having very few issues with supply or latching or pain or much of anything at all. I'm still sore; I'm always exhausted; I'm filled with anxiety that only a new mother can understand; I'm trying my best to adjust to parenthood. I look down at my son, wide-eyed and happy to be fed even though we're in public, only to look up and see someone shaming me. In this moment, I hate breastfeeding in public. Honestly, in almost every single situation (before this moment and long after) when I breastfed in public, I hated it. I just hated breastfeeding in public. There, I said it.

It was difficult for me to not only come to terms with my disdain for public breastfeeding, but subsequently voice them out loud and with no remorse. I am an advocate of public breastfeeding and believe that society should #FreeTheNipple and I will (and do) fight for any woman's right to feed her child however and wherever she wants. However, I didn't like breastfeeding in public. I didn't like putting myself in awkward situations; I didn't like pretending not to notice someone's raised eyebrows or hear their judgmental whispers; I didn't like feeling uncomfortable because someone else couldn't see my breasts as anything other than sexual. Unfortunately, my need to prove a point and, essentially, become a martyr for the #NormalizeBreastfeeding movement, kept me from realizing that my comfort level was worth more than any potential, "teaching moment" I could facilitate by being unapologetic about my breasts and their ability to feed my child.

That's arguably the most prolific downfall of identifying as a woman in a predominantly patriarchal society: we can't just simply exist. Everything we do or don't do is scrutinized ad nauseam, held as some fictitious standard and used to prove a greater point. I am not a woman who decided to become a mother, among many other things; I'm just a mother. I'm not a woman who made the decision to have an epidural; I'm the embodiment of women's inability to handle pain and the result of women being afraid of something their bodies were (arguably) made to endure. I'm not a woman who wants to feed her child; I'm a breastfeeding mother, taking a stand against the judgment and shame and ridicule that breastfeeding mothers face on a daily basis. Every life event or carefully crafted choice becomes some sort of a statement, even and especially when it's not meant to be. I am asked to "speak for my gender" by simply existing. It's all so exhausting, and it has effectively made how a woman chooses to feed her baby more than just a choice, but a political statement.

It's difficult not to want to prove a point; especially when that point is valid and in danger of being sideswiped by rhetoric that attempts to make women feel ashamed about their bodies. It was hard not to stand up for my basic right to feed my kid wherever and whenever and however, especially because, in doing so, countless other women (hopefully) feel empowered to do the same. I can't tell you how many women I looked to for inspiration and strength the moment I became a mother and started breastfeeding. I would recall gorgeous images and unapologetic photographs and remember the supportive words of breastfeeding advocates. Those women truly are inspirational and their voices truly are needed. However, I let myself get carried away with the point I was trying to prove and, in turn, allowed myself to feel vulnerable when I really didn't need to. I put myself in situations where I felt like crawling into myself; where I wanted to disappear; where I sometimes didn't feel safe; where I definitely didn't feel supported, and as a new mother just trying to get through the days, those feelings were something I really didn't need to object myself to.

I let myself worry about what it would "mean" if I said I didn't like breastfeeding in public. I was afraid that people would think I was a bad feminist or that I was malleable and impressionable or that I was ashamed of my body. I let the potential opinions of others (opinions that may or may not have even been real) shape how I acted and essentially become a catalyst for putting myself in situations that made me feel uncomfortable. I wanted to be a good mother and set a good example and be unapologetic about my new life choice and, to me, that meant breastfeeding in public without a cover and with no shame.

I didn't have any shame and I breastfed in public on countless occasions, but if I could go back in time and talk to the new mom, just three-months postpartum, holding her infant some while he happily eats, I'd tell her that she doesn't have to breastfeed in public if she doesn't want to. I'd tell the new mom that's still sore, always exhausted, filled with anxiety and trying to be the best parent that she possibly can be, that pumping to fill a bottle or even supplementing with formula so that she can feel secure and comfortable, doesn't make her a bad mom or a bad feminist and it certainly doesn't mean that she's letting an important movement like #NormalizeBreastfeeding, down.

All it means is that she values her true feelings and emotions and self-care, even and especially if those feelings are telling her that she hates breastfeeding in public.