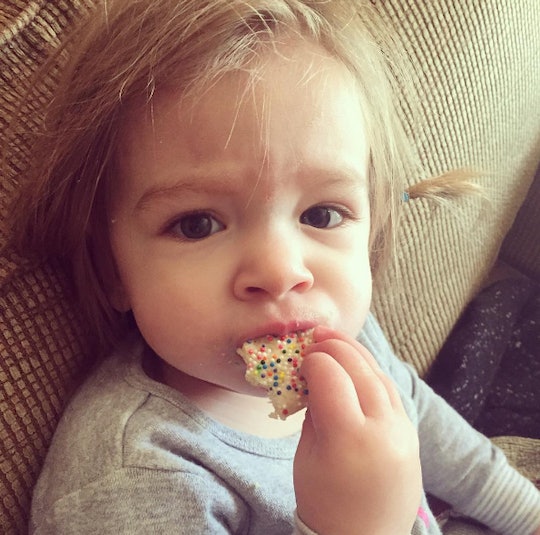 There are few things more frustrating than a kid that won't nap. I fully admit to losing my cool more than once when my daughter has decided to pass up her usual three hour nap and whine all day instead. No matter how much I try, we both end up frustrated, usually crying, and I end up blaming myself. But apparently, it's not always a mom's fault that her kid won't sleep. There are actually several reasons your kid won't nap that have nothing to do with you, so hop off the guilt trip and take a deep breath. (Maybe grab a cup of coffee, too.)

It's pretty wild to think that anyone would turn down a nap, right? Every day, I try to put my daughter down in a dark, cool room with a sound machine playing ocean waves, and stars projected on her ceiling. I read her a few books in a low, comforting voice, and then I snuggle her in with all of her animals and blanket. Nine times out of ten? She passes out before I get her in the bed. But sometimes, she throws a massive fit, screams bloody murder, and leaves me shell-shocked and, not going to lie, super irritated. I mean, her nap is literally the only time I get to myself all day, so when she fights it? I'm not ashamed to say I've thrown tantrums worse than her before.

But apparently it's not because I'm a terrible mother, because I've ruined her, or because I didn't teach her how to sleep. If your kid sounds like mine, there are nine reasons your kid won't nap that have nothing to do with you and can make you feel a little less crazy.

More Like This
18 Instagram Captions For Pictures Of Your Kid's First Swim
Abbot's Formula-Producing Plant Can Reopen In As Early As 2 Weeks — Now What?
17 Best Potty Training Products For Toddlers
Why Is My Vaginal Area Dark?