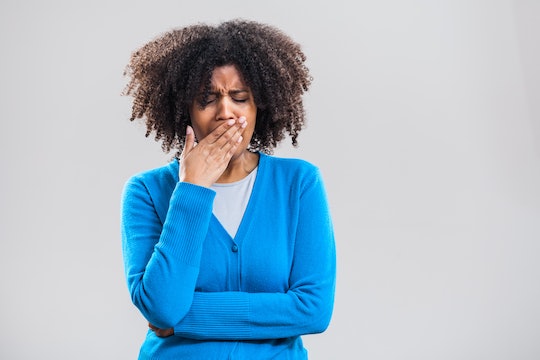 9 Signs You Aren’t Getting Enough Sleep, Aside From The Constant Yawning

“Sleep is for the weak” may be a sentiment you chant when you’re working until midnight, but it’s incredibly false. Shut eye is as vital to human existence as food and water, and yet people aren’t getting nearly enough of it. The National Institute of Health suggests that adults should get seven to eight hours of sleep per night, but most Americans can only squeeze in six hours – and that’s on a good night. And although you may think you’re doing fine on a few hours of rest, odds are you’re showing signs that you aren’t getting enough sleep.

Now, there’s the obvious evidence that you’re tired – the dark circles that have made a home under you eyes and the coffee cup that’s permanently placed in your hands, just to name a few. But there are also the more subtle signs, such as a sudden shift in your mood or a lack of a sex drive. I know you’re a busy woman. You’ve got things to do, and 24 hours isn’t enough time to cross everything off your to-do list.  But sleep deprivation is no joke. Whether you think you’re functioning or not, here are nine signs you aren’t getting enough sleep.

More Like This
Experts Explain Whether It’s Safe For Your Baby To Sleep On Your Chest
Here's How To Handle Potty Training During Nap Time
There’s A Reason Your Baby Always Falls Asleep While Breastfeeding
How Do I Date As A Widow Without Guilt?