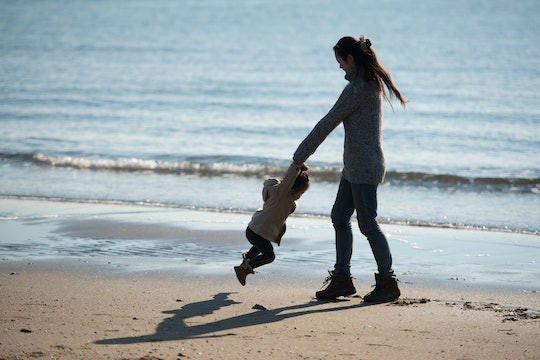 9 Struggles Every Parent Of A Skinny Kid Goes Through

We live in a society where people have to deal with fat shaming on a regular basis. Body shaming, in general, is something no one should have to deal with, but an interesting subset of body shaming that, perhaps, is even a little surprising, is shame directed at those who are considered too small. Yes, this is a thing. There are lots of struggles every parent of a skinny kid goes through as a result of, essentially, skinny shaming. Struggles that the parent of a "normal kid," (whatever that means, because I'm pretty positive that isn't a thing) wouldn't necessarily experience.

Most of those struggles involve copious amounts of guilt. Even though, in order to have a 50th percentile there need to be kids on both ends of the spectrum, the idea or image of a "chubby baby" is associated with health. People assume that baby is getting nourishment and constant love. The image of a skinny baby, however, is associated with malnourishment. People assume a skinny baby is being mistreated and isn't receiving the nourishment necessary to remain healthy. (Isn't it interesting, how completely opposite our views tend to be when we become adults and look at adult bodies?) These assumptions can leave many mothers thinking that their skinny baby is skinny because of them; that they're doing something wrong; that there must be an important step in feeding their kid that they're somehow skipping; that their baby isn't healthy when, truth be told, they are.

Listen, being a parent means feeling a lot more guilt than you've ever felt before in your life. I guess that's to be expected; you're entirely responsible for another life, right? When you're dealing with "failure to thrive," or just a kid who is small for their age, you are constantly asking yourself if you've done enough as a parent or if you missed something, somewhere along the way, that could've made things easier on your kid.

It ain't fun, to say the least. Here are nine other struggles parents of skinny kids have to contend with: