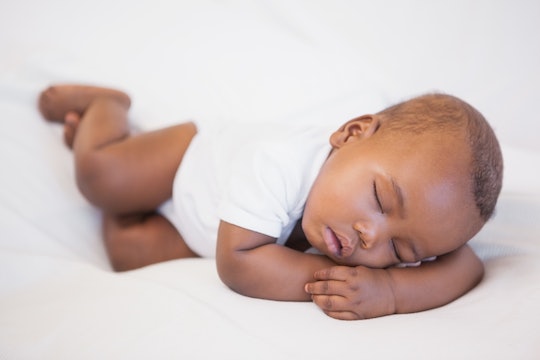 For me, co-sleeping was less of a choice and more of a necessity. A few hours after my son was born, he struggled to properly regulate his body temperature. Doctors and nurses advised that we co-sleep, so my body could help my son do what his body was having difficult doing. We slept skin-to-skin that first night in the hospital, and co-slept until he was a year old. Then, all of a sudden, my son was sleeping in his own bed and I was sending the texts every co-sleeping mom sends the first time her kid sleeps alone, usually to my poor partner and mother and friends and anyone that would let me simultaneously celebrate and lament.

I had become so used to sharing my bed with a tiny little baby-turned-toddler, that the first night he slept alone I was both excited and nervous. I was checking in on him all the time but spreading out and enjoying all the space and the fact that I wasn't, you know, getting kicked in the face at all hours of the night. Like parenthood in general, that first night my kid slept alone was a mix of good and bad. I was so happy and ready to give my son more freedom (and have some of my own) but I was sad that my tiny mini-heater was no longer cuddling with me.

In the end, the best way for me to express my happiness and sadness was through text messages, because it's 2016 and, um, how else are you supposed to communicate? I'd like to assume I wasn't the only co-sleeping mom to send the following texts to friends and family: