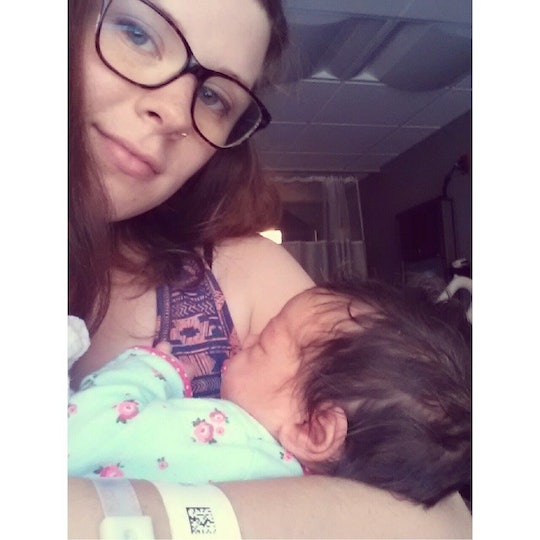 The Real Reason I'm Co-Sleeping With My Baby

I have to confess that before I became a mom, I was totally the childless friend judging other women for the choices they made for their children and their families. Looking back, it’s funny to me how much I felt I knew about being a parenting until I actually became one. I had lists and lists of things I would never do and at the very top of that list was co-sleeping. Before I had kids I swore I'd never co-sleep because I thought that it was unsafe, but the real reason I co-sleep with my kids has nothing to do with that.

Here’s the thing: I really didn’t know anything about co-sleeping before I became a parent. I'd seen a campaign online somewhere that suggested it was one of the "most dangerous choices new moms could make" and formed my decision from that one piece of information. It didn't matter how right or wrong it was at the time — it was just... there. Now, I am a mom of two, with a third on the way, and I am an unapologetic co-sleeper. It isn’t because I think co-sleeping is superior or even because I romanticize it in some way.

No. The real reason I’m co-sleeping? I’m desperate to get some sleep.

After the birth of my child, I made a serious effort to slide out of bed and move into the rocking chair each time she breastfed. When my supply became an issue very early on, I was setting an alarm to wake more frequently, encouraging my daughter to nurse, supplementing with formula or donor milk afterwards, and then pumping for 20 minutes after we'd finished as I was instructed by my lactation consultant. Within a few weeks of giving birth, I was dangerously tired. I was falling asleep in the rocking chair or on the couch while breastfeeding my daughter.

And soon enough, I became really nervous about hurting my child. I was worried she'd roll out of my lap when I accidentally fell asleep in the rocking chair or I might smother her while propped up on pillows on the couch. This was the first time I considered giving co-sleeping a try. I had friends who did it and who swore there were safe ways to sleep with your baby. They even said that sleeping with your baby in your bed was way safer than falling asleep with them on the couch or in a rocking chair, if you knew what you were doing. So I figured I'd give it a try.

I had a clearer head and felt I was more capable of safely parenting my newborn baby. Of course, I was still exhausted, but I was no longer so tired that I felt I was dangerous with my child in the middle of the night.

It turned out, they were totally right. After some research on safe co-sleeping practices, I removed excess bedding from our bed and my partner moved to the couch temporarily while I adjusted to having a baby in my bed. I took the suggested precautions to avoid my baby rolling out or off the sides and started breastfeeding lying down.

Immediately, my fears of hurting my daughter decreased and I started sleeping more. The added sleep was life-changing. I had a clearer head and felt I was more capable of safely parenting my newborn baby. Of course, I was still exhausted, but I was no longer so tired that I felt I was dangerous with my child in the middle of the night.

Though all of these added benefits of co-sleeping are great, they're not the reason I co-sleep.

Co-sleeping isn’t a perfect solution for my family. I prefer to sleep alone with my husband. To be perfectly honest, I am quick to move my babies to their cribs as soon as they start sleeping through the night and I'm not at all sad when that time comes. However, this choice to co-sleep is one we've grown more comfortable with because it's the only way for us to get some sleep. After two babies who barely slept for the first six months of their lives, I am fully prepared to continue co-sleeping when my next baby arrives. Without dragging myself out of bed, and remaining awake through every feeding, I can doze of while my baby nurses, wake to switch sides, keep him in bed with me through the night, and then, when he finished, place him back in the bassinet that sits next to our bed.

I know all about the benefits of co-sleeping, mostly because I was so hesitant about the practice from the start. My research taught me that women who co-sleep see that their babies are at a lower risk for SIDS. I also know that co-sleeping provides babies and moms with an added chance to bond with each other, mainly because I've experienced that myself. Twice. And though all of these added benefits of co-sleeping are great, they're not the reason I co-sleep.

I co-sleep because I have to if I want to survive the first several months of sleepless nights. I co-sleep because, if I don't, I become so tired I feel I'm a risk to my children in the middle of the night. I co-sleep because without sleep, I am emotionally volatile and really struggle to enjoy my time as a new mom. One study found that co-sleeping moms get more sleep and in my mind, that is the biggest benefit of co-sleeping. I've seen how important a little more sleep is in my own life. If rearranging our sleeping habits a little means I get a healthier amount of sleeping during the newborn daze, I am more than willing to bring a baby into our bed.

More Like This
Should You Swaddle Your Baby In The Summer? Here’s How To Dress Them
The Covid Vaccine For Kids Under 5 Has Been Sent To The FDA For Review
Can The Baby Have That?
Here's Why Wearing Long Sleeves In The Summer Can Be Good For Your Baby