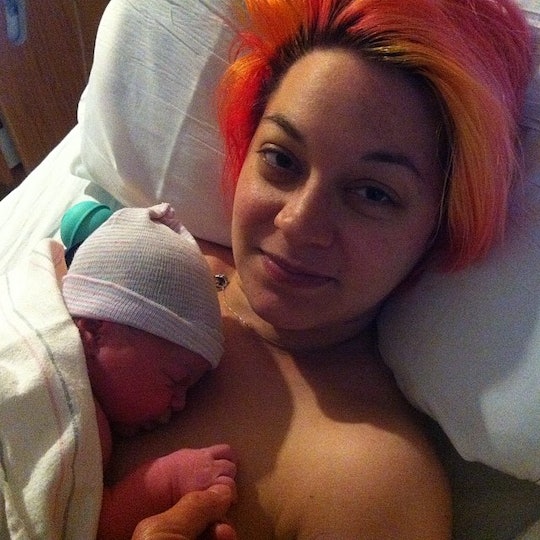 When I found out I was pregnant, I prepared the ways I figure most new parents do: I bought too many gadgets, hoarded hand-me-down clothing, and put together a birth plan that was incredibly detailed. I knew I wanted to breastfeed my baby and, when I asked my midwife about what I should do to prepare for that, she essentially told me that I didn’t have to do much. She assured me that most people can breastfeed and, as long as I did lots of skin-to-skin with my baby and made sure the hospital staff knew I planned to breastfeed, we’d be all good. Since I didn’t know what else to expect, I believed her. I didn't know much about giving a baby donated breast milk or that breastfeeding could be a struggle.

Of course it would happen for me, I figured. It’s only natural. Looking back, I wish I had done more research because I was definitely not prepared for the stress of the first week-and-half of my baby’s life. My daughter was born weighing 7 lbs., 9 oz. and she was everything I could have hoped for. This tiny, beautiful little creature was placed on my chest within minutes of being delivered, and it didn’t take her long to find my nipple and begin to suckle. In that moment, I knew that breastfeeding would be easy for us. But my postnatal haze was suddenly interrupted when the nurses and doctors said, “I’m sorry, ma’am, but we have to give the baby to your husband. You have a 104.6 degree fever and are at-risk for a stroke.” I protested. I felt fine! They assured me that was the adrenaline and I was not fine. I had preeclampsia. They had to give me a medication called magnesium sulfate in order to reduce the risk of me having a stroke.

The medicine made me very groggy, but once I was wheeled into a recovery room, I kept my baby on my chest as much as possible. The first day, she seemed to be latching well and I had no worries. I was assured my milk would come in sometime between day three and five and, until then, the baby would be getting the colostrum I was already making. But by nightfall on her first day of life, I noticed that she was sleeping a lot and was less interested in latching on.

We’d ask the nurses about it, and each nurse had different information. What I know now is that newborns should be feeding approximately every two hours, but back then, one nurse told us she should feed every three, and the next told us she would latch when she was hungry. By the morning of day two, my daughter wouldn’t latch at all and she screamed and screamed and screamed. I went to see the hospital’s lactation consultant. Of course, during that hour consult, she latched fine and nursed like a champ. I was assured that we had "nothing to worry about," and I was sent back to my room, where my daughter refused to latch again.

I decided that the universe had given me so much milk because I was supposed to help another baby who needed it, the way someone had helped me.

I grew concerned. We told the nurses she hadn’t latched in four, five, now six hours, but no one else seemed as worried — until it was time to go home. They weighed my baby one last time and suddenly, everyone panicked. She’d lost too much weight, they said. She can’t go home, we were told. We were so confused. We’d been asking for help and support and hadn’t gotten any. And now we couldn't leave.

The fact that someone else had lovingly pumped, stored, and donated their milk so that my baby could benefit from it is one of the kindest things I can imagine.

Without explanation, a hospital-grade breast pump was wheeled into my room and I was hooked to it. I cried as the lactation consultant started talking to me about supplementing, about donor milk, about formula. No one assured me that what I was going through was incredibly common and that we would be able to have a successful breastfeeding relationship down the road. Finally, a midwife came in and helped us get a latch, and it became clear that my baby had stopped latching because she was too worked up to do it and too weak to manage it.

On day three, we were sent home with approximately 8 oz. of donor milk from the milk bank and instructions for me to pump for 20 minutes every two hours to try and help my milk come in. I was grateful for the donor milk, because I wanted to avoid giving my baby formula if I could. I had hoped she would be exclusively breastfed, and since I didn't know anything about supplementing, I (wrongly) feared that giving her formula would ruin my chances to breastfeed. I knew the milk came from a milk bank, and since it had come from the hospital, I didn't worry about whether it was safe. But I wasn't given instructions about what to do if or when that donor milk was gone; it was just assumed my milk would be in by then.

No one told us how much milk to feed the baby in a single feeding. We used an oral syringe to give her the milk to avoid “nipple confusion," which can happen when you give a newborn a bottle in the hopes that she would be latching soon. What we didn’t realize was that they’d given us only enough milk for two feedings. So we were rationing this milk out, thinking it was supposed to last a few days, not realizing we were essentially starving our baby. I was hooked up to the breast pump, sobbing, thinking about what a failure I was because I couldn’t feed my baby.

The next day, we took the baby to her first pediatrician appointment. It was determined that she'd still lost too much weight and now had jaundice. But our doctor was a saint, and she sat down with us and explained how many ounces in a feeding our baby should be getting. She also explained that, if I had no more breast milk, we were going to have to supplement with formula. I didn’t yet know about peer-to-peer milk sharing groups on Facebook, and we'd only just started to look into getting more donor milk from the milk bank, but we to found it was several dollars per ounce and therefore, prohibitively expensive.

I donated over 300 ounces of my milk to a woman who was unable to produce enough milk for her daughter. It made me feel so great to be able to help out another family who needed it. If I knew then what I know now, I would have sought out donor breast milk during that first week.

My doctor assured us that supplementing with formula did not mean the end of my nursing relationship with my daughter. In between feedings, if I kept her on my chest and continued trying to latch her, along with the pumping sessions I was doing, she said that my milk would come in. I felt defeated the first time I gave my baby the formula via a syringe, but I didn’t give up. I began to do research about breastfeeding online, and found support groups that answered so many questions for me. I kept myself topless and my baby essentially naked and hung out on the couch all day. I also found out that the medication I’d been given after delivery can delay milk coming in, but no one ever told me that. On the evening of day five, I started to see droplets of moisture on the flanges of the breast pump. I called my husband excitedly. “My milk is coming in!”

I wish I could say that it was smooth sailing from there, but it wasn’t. It took about four more days for my daughter to latch to my breast. In the meantime, I pumped every two hours and, with each pumping session, I’d have a little more breast milk and a little less formula to feed her. Eventually, she was receiving only my milk in the syringe. And then one afternoon, at a week-and-half old, she finally latched. We never looked back, and I ended up nursing her for 22 months. Even though it was only about 10 days, they were the longest 10 days of my life. It felt like 10 years, and I worried about whether I was starving my baby and whether I’d be able to make the food she needed.

Ultimately, I ended up with an overabundance of milk. I had an oversupply, which is not nearly as fun as it sounds. But as a result, I had much more milk stored in my freezer than my baby could ever eat. I decided that the universe had given me so much milk because I was supposed to help another baby who needed it, the way someone had helped me. I looked into donating to the milk bank, but due to being on a prescription medication (even though it was deemed perfectly safe for nursing parents), I was ineligible to donate.

It was then that I found Human Milk 4 Human Babies, a Facebook group that connects people looking for milk for their babies to people looking to donate their milk. I donated over 300 ounces of my milk to a woman who was unable to produce enough milk for her daughter. It made me feel so great to be able to help out another family who needed it. If I knew then what I know now, I would have been more adamant about finding donor breast milk during that first week.

Peer-to-peer milk sharing, though it’s discouraged by the Food and Drug Administration, is generally safe. In fact, La Leche League recently changed their stance on it and now provides the information on peer-to-peer milk donation. If you screen donors according to your own health standards (and you can pasteurize the milk yourself, too!), there’s no reason not to accept donor milk from someone who wants to give it, if that's your prerogative. Lactating women have been feeding other women’s babies for eons, and wet nursing is incredibly common in other parts of the world, too.

Donated breast milk was one of the greatest gifts anyone ever gave my baby. It allowed me to give her the benefits of breast milk during her first few days of life, when my body was unable to produce it for her. The fact that someone else had lovingly pumped, stored, and donated their milk so that my baby could benefit from it is one of the kindest things I can imagine. I feel lucky to have been able to return the favor for someone else’s child.